Pope Francis said St. John Paul II showed sick people how to “carry the cross of suffering with joy” on the eve of the 10th anniversary of the Polish-born pope’s death.

Pope Francis spoke to tourists and pilgrims during his weekly general audience in St. Peter’s Square on Wednesday, the AP reports. John Paul died on April 2, 2005, at age 84, in the Apostolic Palace next to the square where Pope Francis spoke. John Paul became the Catholic Church’s first non-Italian pope since the 15th century when he was elected in 1978. He served until 2005, the second longest pontificate in history.

“We remember him as a great Witness of the suffering Christ, dead and risen,” Francis said. 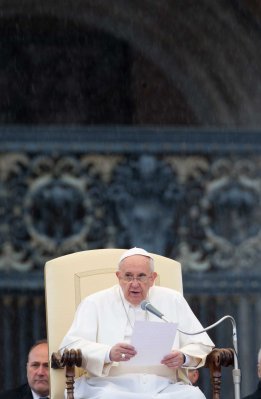