Indiana Gov. Mike Pence urged state lawmakers Tuesday to amend a controversial new religious freedom law to clarify that it does not allow businesses to discriminate, bowing to days of criticism that the measure was an invitation to refuse services to gay customers.

“After much reflections and consultation with the leadership of the General Assembly, I’ve come to the conclusion it would be helpful to move legislation this week that makes it clear this law does not give businesses the right to deny services to anyone,” Pence said in a news conference.

The clarification to the state’s Religious Freedom Restoration Act would explicitly state that the law does not give businesses the right to discriminate. Pence is pushing to enact the change this week.

The law, which Pence signed last week, has ignited a national firestorm from opponents who decry it as anti-gay. Activists pointed to statements made by advocates of the law, who said that florists, for example, could deny service to weddings of gay couples. Business leaders, from Indiana health corporations to Apple CEO Tim Cook, also spoke out against the law, and a movement to boycott Indiana gained traction Monday.

Pence staunchly defended the law on Tuesday, even as he called for an amendment that would address what he called “mischaracterizations” about the bill.

“This law does not give anyone a license to deny services to gay and lesbian couples,” Pence said. “The language I’m talking about adding would be consistent with what the General Assembly intended, and certainly what I intended.”

Pence said he was stunned by the backlash the law prompted. He attributed the controversy to “reckless” media coverage of the law.

“Was I expecting this kind of backlash? Heavens, no,” Pence said. “Candidly, when this erupted last week, I was taken aback.”

A federal version of the law was enacted by then-President Bill Clinton in 1993, and an Illinois version was supported by then-Sen. Barack Obama. Almost 20 states have similar laws on the books. The law, proponents say, would protect religious liberties from government overreach. Proponents have pointed to the example of a Muslim prisoner who would want to have a beard despite prison regulations against facial hair as the kind of individual the law would seek to protect. But at a moment when same-sex marriage is increasingly sweeping the country, advocates have seized on a moment to paint it as a relic from another era.

Pence, who has not ruled out a campaign for the Republican presidential nomination in 2016, has drawn national criticism for the law, as well as support from conservatives and some GOP presidential candidates. Pence will announce whether or not he will run for president at the end of April at the earliest. 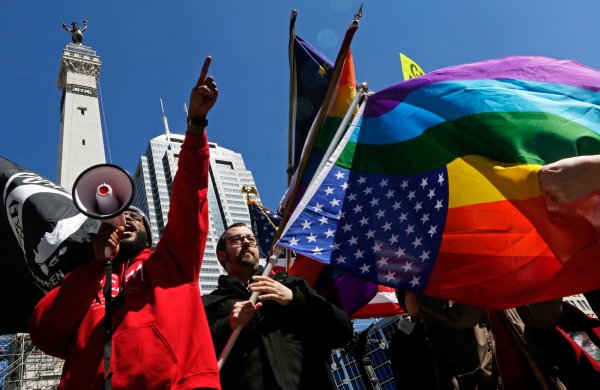 The Debate Over What Indiana's Religious Freedom Act Is Really About
Next Up: Editor's Pick