Martha Stewart's Performance at the Justin Bieber Roast Was Worth Celebrating

If last night’s broadcast of the Comedy Central roast of Justin Bieber is any indication, Martha Stewart has entered a new phase of her career — and it’s one that’s defined by subverting her image. Call it an unexpected, welcome turn from a star whose perceived image of chilly perfection has too long been ripe for mockery by others. At last, Stewart seems to be in on the joke.

A transcript of Stewart’s remarks last night is available at PEOPLE; it revealed the homemaking entrepreneur as someone who was alternately extremely vulgar—remarkably so, given the public sense of her—and wittily aware of her history. Stewart has, in general, tried to put her 2004-05 prison sentence behind her, emerging from the clink to do a humorless Apprentice spinoff and spending the subsequent years rebuilding her business ventures; last night, she made frank reference to her time behind bars in giving Bieber “tips to use when he inevitably ends up in prison.”

The whole point of roasts is to mock other people on the stage in as brutal a manner as possible, and the fact that Stewart was game was a pleasant surprise; one might have imagined a figure who’s been historically concerned with projecting perfection might attempt to save face by declining to indulge in racial and sexual humor. Even when the jokes were not per se funny, as when she called comic Hannibal Buress “that gingerbread man I left in the oven too long,” the fact that they were being made by a person not historically known for taking edgy risks added a special charge. Her joke about Ludacris using her “Martha Stewart bed linens” was, structurally, a yawner, but when had we previously seen her treat her business ventures as anything but gravely serious?

Is this the real Martha? Of course not: Roasts are all about creating a vicious character. It’s not as though Stewart is about to start going after Paula Deen and Ina Garten in interviews. But the one commonality between Roast Martha and Real Martha is a certain edgy sense of risk. Stewart has always had a certain uncultivateable oddity underpinning her domestic perfection. In the distant past, there was her grim knife-wielding “I want to focus on my salad” interview, in which she was unconcerned with how threateningly grim she appeared. More recently has come an uncannily flat TV ad campaign for cough drops and a strange, untrammeled Twitter feed in which Stewart posts revolting pictures of food and defenses of drones. Both Real Martha and Roast Martha care little for what the public thinks of them. But at the Comedy Central roast, Stewart finally put all the strangeness that we know she’s capable of to use.

Here’s hoping for more of the same from Stewart: She too often, though less in recent years, comes in for mockery for a perceived humorlessness. But both Stewart’s place in the culture and her openness to all sorts of experiences, from using social media to share gross food photos to taking jabs at a pop star on a stage, are self-consciously absurd and worth celebrating. Having achieved grudging universal respect for her business achievements, Stewart is now getting the celebration underway. 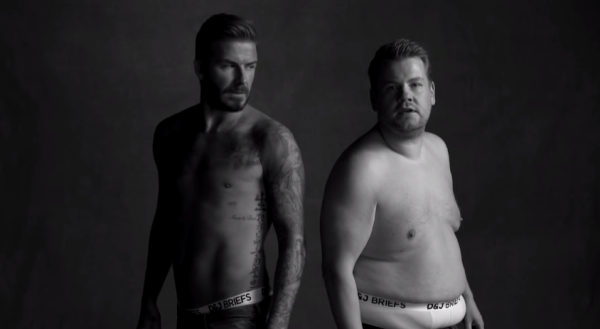 David Beckham and James Corden Strip Down for Underwear Ad Skit
Next Up: Editor's Pick