Houston Rockets center Dwight Howard honored James Fisher, a young boy who died on Monday after a battle with brain cancer, with an Instagram video.

Howard posted the video with the accompanying caption: “Rest in peace lil James Fisher. He passed away a couple hours ago. He was the little kid I picked up to dunk a couple of months ago during pregame warmups. He also gave me the rubber band that says James strong. He was such an inspiration to me and my teammates. I have worn the band everyday since he gave it to me and I will continue to wear this band. You are in a better place. No more pain. No more hospital visits. Just peace love and happiness. And you can dunk as many times as u want. See u in heaven James.”

Howard and Fisher met in December, when Howard helped seven-year-old Fisher dunk a basketball before the Rockets’ game against the Phoenix Suns at the Toyota Center on Dec. 6.

On a Facebook page set up on Fisher’s behalf, his family encouraged funeral visitors to arrive wearing jeans and a Houston Texans jersey or Rockets t-shirt since Fisher “loved” those two teams.

Howard returned to the court last week after missing 26 games with a knee injury. The 29-year-old center is averaging 15.9 points, 10.6 rebounds and 1.3 blocks per game this season. 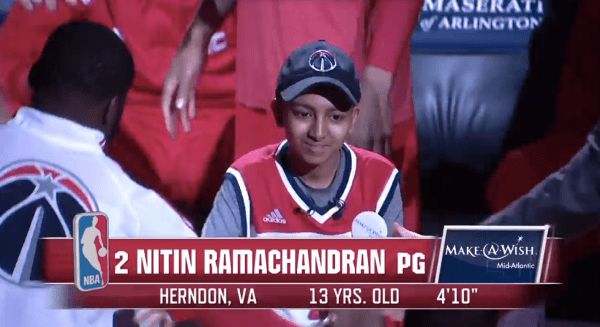 Washington Wizards Let 13-Year-Old With Brain Cancer Join the Team for a Day
Next Up: Editor's Pick