Dancing With the Stars Watch: Plenty of Salsa and Cheese on Latin Night

Welcome back to Dancing With the Stars, where each week one couple inches ever closer to taking home the coveted Mirror Ball Trophy — and one couple gets sent home to think about what they’ve done.

This week it’s Latin night, meaning Latin dances, Latin flair, and at least one song by Pitbull, Shakira and Gloria Estefan (it’s a law!). Perhaps even more exciting, it’s the first week that the dancers can incorporate lifts into their routines. That means more drama, more excitement and more possibility that people will fall a lot during rehearsal.

Rumer Willis and Val Chmerkovskiy: Because Val and Rumer are gifted, simply dancing a salsa isn’t enough for them. Instead they opt to mash up their salsa with disco — and the only place to rehearse a disco salsa is at the roller rink. They strap on their roller skates and have a retro good time until Rumer overenthusiastically jumps on Val’s face, splitting his lip, and getting his microphone hooked on an intimate part of her tights. Glad the cameras were there to capture it all. For the performance, Val and Rumer have realized that if you’re going to attempt a disco salsa, you have no choice but to go full Saturday Night Fever, feather your hair and dance to Gloria Estefan’s “Turn the Beat Around.” Len Goodman thought it was the best dance so far. Bruno Tonioli tried to make “Monday Night Fever” a thing and host Erin Andrews, bless her, let us watch Rumer’s accidental face plant, in slow motion, twice. 33/40

Charlotte McKinney and Keo Motsepe: Charlotte claims she is a “visual learner,” and that’s why Keo has to show her each step over and over again. Plus she is a full-time model and actress and needs to answer all of her emails all the time, much to Keo’s frustration. While it’s clear she is not giving her full attention to the rumba, it’s also clear that the producers are not giving her the kindest edit this week. It does not bode well for her chances in the competition. The dance ends with Julianne Hough full on pouting because Charlotte is wasting her potential. Julianne demands that Charlotte go back to her room, take off her socks, and build up callouses, which is not quite a normal thing to say (except in dance, probably). Bruno rudely said she would “never win the Nobel Prize.” As the women yelled him down, Tom Bergeron walked over and whispered to Bruno, “Neither will you.” Can we just give Tom the Mirror Ball, now? 22/40

Michael Sam and Peta Murgatroyd: To spice up their salsa (to “Celebrate” by Pitbull, natch) Peta choreographed multiple lifts thinking that since Michael is used to blocking 200-lb. men on the football field, he should have no problem tossing her up into the air multiple times. She came to regret that decision when during rehearsal it became clear that Michael didn’t know his own strength and kept throwing her halfway across the room. Luckily he sorted it out before he hit the dance floor. Bruno was impressed with his restraint, but was distressed about his lack of timing. Carrie Ann didn’t feel “safe” during the routine, even though she wasn’t the one that Michael was throwing into the air like pizza dough. 24/40

Riker Lynch and Allison Holker: Allison told Riker that he needed to “be sexy” for his salsa, which Riker translated to mean borrowing a short-sleeved sparkly shirt from his mom, and then ripping it open at the end of the dance, in order to wring the last possible vote out of any teens watching with their families at home. Len felt the need to be honest and told Riker that he wasn’t the best dancer, but had flair. (Is that what they’re calling spray tans these days?) The rest of the judges loved it, though, with Julianne and Bruno applauding it as real salsa. 34/40 (with Len stubbornly giving a 7)

Suzanne Somers and Tony Dovolani: At 68 years old, Suzanne is a woman prepared for any occasion, which is why she can wear her own fruit hat for her dance tonight. While Suzanne hasn’t had an opportunity to wear her fruit hat in 35 years, it still fits and stays on her head for the entire samba. The dance ended with Tony swinging Suzanne and her fruit hat around and sliding them between his legs for a dramatic finale. Len declared that it was “juicy, fruity and full of fun,” just like her hat. 25/40

Chris Soules and Witney Carson: Going into his Argentine tango, the Bachelor is in last place, but he is determined not to fail. To prove his seriousness, Chris wears a leather-accented tuxedo sans shirt, which is definitely what people wear to serious occasions like court appearances and will readings. Witney has choreographed an intense routine to “Dangerous” by David Guetta (which is not especially Latin, but works for these purposes) and Chris manages to pull it off. As the lights went up, Julianne crowned him “the comeback king.” Then in a massive brain freeze she declares, “You just Redfoo’d yourself!” Does Julianne not remember that Redfoo got kicked off last week? 28/40

Robert Herjavec and Kym Johnson: Despite a flare-up of pain from an old injury, the Shark Tank judge throws himself into a romantic rumba with Kym. It’s a solid, elegant routine, but once again it’s not quite enough to distinguish him from the pack of other dancers. The judges were underwhelmed by the routine, which Len dubbed “very middle of the road.” The only one to disagree was Julianne, who thought it was his best dance so far. 29/40

Patti LaBelle and Artem Chigvintsev: After getting down in the club with 50 Cent last week, this week Patti cha-chas to Santana while checking into the Hotel LaBelle. (Artem seems to be sidelining in set design this season.) The dance was entertaining, if not particularly energetic. Len kindly said there was a certain charm about Patti, but thought the dance lacked enough cha-cha content, which is Artem’s fault, not Ms. LaBelle’s. 22/40

Willow Shields and Mark Ballas: Resident teen Willow is dancing a paso doble to “Hanuman” by Rodrigo y Gabriela, despite the fact that she doesn’t think she has the life experience to give the paso the intensity it deserves. Guess you don’t pick that up in pre-algebra class? For the routine, Mark wisely clad Willow in a girl-on-fire dress that will subtly remind viewers that she was in The Hunger Games. Len liked the performance and thought it set the bar for pasos (it was the first one of the season so, yeah, it set the bar). 32/40

Noah Galloway and Sharna Burgess: For his Argentine tango, Noah is supposed to wear a prosthetic arm to complete the frame, but it’s uncomfortable and not working for him. Two days before the performance, they reconfigure the dance so he can do it without his arm. Dancing a one-armed tango is an impressive feat, especially considering that there are lifts in the routine. The second the dance ended, the audience exploded in applause. While Carrie Ann felt compelled to nitpick, Len declared Noah his hero and loved Sharna’s imaginative choreography. 30/40

Nastia Liukin and Derek Hough: Between his work at the New York Spring Spectacular and her studies at NYU, Derek and Nastia only have a little time to rehearse. So Derek wisely used their limited rehearsal time to stomp on her thumb, immobilizing it and causing it to swell. Luckily for him, Nastia is one tough cookie who has willingly performed gymnastics with a broken ankle, so a samba with a swollen thumb is no big deal. For their samba, Derek wisely chose to perform sans shirt to distract the judges (especially his sister who would be forced to avert her eyes). It was a solid routine despite their abbreviated rehearsal time, much to the frustration of all the competitors who actually had to practice. 34/40

In Jeopardy: Chris and Witney, Charlotte and Keo, and Noah and Sharna, who are just there to make people feel bad for not voting.

Leaving Tonight: Charlotte is going to have a lot more time to catch up on her emails, because she is going home. She whispers to Keo, “I’m sorry.” 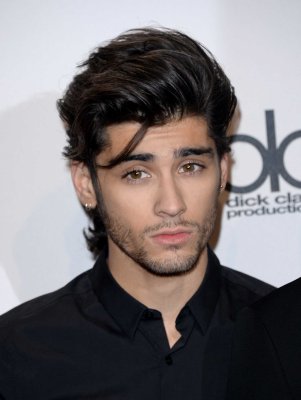 Zayn Malik Caught in Middle of One Direction Fight With His New Record Producer
Next Up: Editor's Pick