For South African comedians, there is no shortage of rich material. A President charged with using state funds to upgrade his personal home with a top-of-the-line chicken coop to an electricity company better at delivering excuses than power — the company recently blamed wet coal for power outages. So it is with some degree of regret, and with a great deal of pride, that South Africans welcomed the news that Soweto-born Trevor Noah is to take over The Daily Show when host Jon Stewart steps down later this year.

Twitter lit up with notes of congratulations and support, as South Africans bequeathed yet another star to the international pantheon of household names. “Could Trevor Noah be SA’s third A-lister after Madiba and Charlize?” wrote Capetonian Sibongile Mafu, using an affectionate term for Nelson Mandela and referring to Academy Award–winning actress Charlize Theron. “I think so!”

Other South African comedians celebrated with humorous riffs of their own, pondering the wealth that comes with taking the job of one of the best-paid television hosts in American history: “South African Google hangs as thousands search “John Stewart’s Salary” #dailyshow #TrevorNoah” tweeted radio host Darren Simpson, before going on to note that his ascension to Jon Stewart-dom “makes you realize your dreams.”

Simpson, who has known Noah since 2006 from their time together on South Africa’s comedy circuit, tells TIME that there is “no doubt that Trevor can deliver. He is a phenomenal talent. He is going to offer something completely different, and completely great.” His humor, notes Simpson, will make for a seamless transition. “The fact that he is from South Africa is superfluous to what an incredible talent he is.”

Not that South Africans will let it be forgotten that Noah is one of their own. “Congratulations, @Trevornoah, on the temporary reunification of South Africa,” tweeted author Richard de Nooy in a take on Noah’s bi-racial origins as much as his ability to transcend the legacy of apartheid and take on still-touchy race issues.

Noah, the son of a black Xhosa mother and a white Swiss-German father whose relationship was illegal during the time of apartheid, often likes to joke that he shouldn’t be allowed to exist. That mixed heritage sparked humorous debate on Twitter, as correspondents mockingly claimed Noah for one race or the other. “Breaking: amaXhosa and Swiss-Germans in fierce race to claim Trevor Noah,” tweeted Cape Town–based journalist Lester Kiewit.

Much has been made of the fact that The Daily Show has chosen for Stewart’s successor a relative unknown on the American comedy circuit. Noah has only made three appearances on the show since he came on as a correspondent in December, and the fact that he has supplanted other favorites may rankle avid Daily Show fans stateside. But for Americans who are only now starting to wake up to the serious race issues that divide the U.S., Trevor Noah could not be a better gift from South Africa. His brand of satirical sugar may yet make the medicine go down. For South Africans, however, the parting is bittersweet. “Trevor is going global, and that’s great,” says Simpson. “But we are going to have to get used to seeing a lot less of Trevor Noah, and that’s a loss.” But when it comes to commenting on the President’s chicken coop, there is sure to be plenty of folks to take his place.

Read next: Trevor Noah Is the Sort of Risk More Networks Should Take 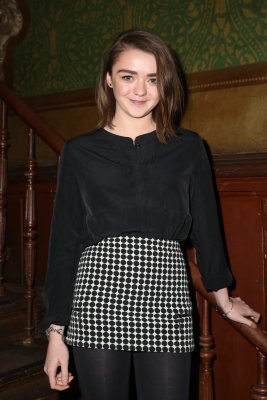 Game of Thrones Star Maisie Williams to Appear on Doctor Who
Next Up: Editor's Pick