Amanda Knox, the U.S. student convicted of murdering her British flatmate Meredith Kercher in Italy in November 2007, arrives at the court during her appeal trial session in Perugia in this September 30, 2011 file photo.
Alessandro Bianchi—Reuters
By Charlotte Alter

Knox and her then-boyfriend Raffaele Sollecito were convicted as co-conspirators in Kercher’s murder in the apartment they shared as exchange students in Perugia in 2009. But that conviction was overturned in 2011 and in 2014, after prosecutors argued that evidence had been omitted in the appeal, the original guilty verdict was reinstated. Knox was re-convicted in abstentia.

But Italy’s Supreme Court ruled Friday afternoon to finally acquit the 27-year old American of the long-hanging charges over her. She had faced extradition to Italy if the conviction had been upheld.

Knox released a statement saying she was “tremendously relieved and grateful” for the decision.

“The knowledge of my innocence has given me strength in the darkest times of this ordeal,” Knox says in the statement. “And throughout this ordeal, I have received invaluable support from family, friends, and strangers. To them, I say: Thank you from the bottom of my heart. Your kindness has sustained me. I only wish that I could thank each and every one of you in person.”

A man named Rudy Guede, whose fingerprints and DNA were found at the scene, has already been convicted for the murder and is currently serving a 16-year prison sentence, but prosecutors had argued that Knox and Sollecito were Guede’s accomplices.

This means the only standing conviction against Amanda Knox is a slander conviction for 2007 statements she made blaming bar owner Patrick Lumumba for Kercher’s murder. Lumumba was eventually cleared and sued Knox for slander. She was convicted and eventually received a 3-year prison sentence, which will now be counted as time served, since she has already spent almost four years in prison.

Since she moved back to the US after her 2011 acquittal, Knox has been leading a quiet life. She finished her degree at the University of Washington and got work as a freelance journalist for the West Seattle Herald. She was reportedly paid $4 million for her memoir about her experiences in Italy. And she’s engaged to a musician, Colin Sutherland.

Read next: A Look At The Amanda Knox-Inspired Movie The Face of an Angel 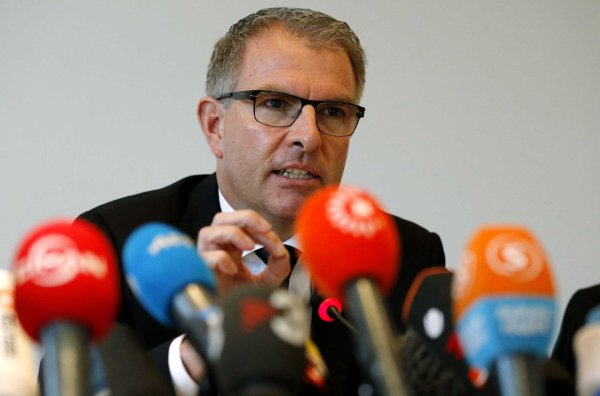