Justin Bieber and the History of the Roast

On Monday night, schadenfreude-lovers can tune into Comedy Central to watch Justin Bieber get honored by means of humiliation.

The teen-dream-turned-angsty-20-something is the latest victim/guest of honor of a comedy roast, which will air at 10pm EST but was filmed earlier this month. Though Bieber’s a very modern target, the ribbing he’ll endure is a tradition that has a century-old history.

In the early 20th century, testimonial dinners held to praise an invited guest were all the rage among clubs and organizations.

“They were huge,” says Barry Dougherty, historian and head roast writer for the Friar’s Club, the fraternal and funny organization famous for hosting roasts. “But when other organizations had these things, they would be nice. Because of our particular group of friars, who were sharper vaudevillians, they would be witty, smart and sarcastic. They would make jabs.”

Dougherty says that the club, founded in 1904, probably had its first testimonial turned (not-yet-named) roast in 1907. A 1910 headline in the New York Tribune documented the early days of the unorthodox dinners with the headline: “FRIARS KID MR. HARRIS: Veteran Theatrical Manager Butt of Jokes at Dinner.”

“It was a new thing, no one ever thought to do it before,” Dougherty tells TIME, adding that other organizations started jumping on the sarcastic bandwagon. But the dinners started to get out of hand.

“[The roasters] kept upping the ante,” Dougherty says, and over the years the jokes got more and more extreme. “When you got to the ’40s [the friars] wondered if they should put the breaks on it or have a separate event, all roasting, no nice stuff.”

They went with the latter.

The first official roast, so named because of the many times a guest of honor would get “burned,” occurred in 1949. The subject was French actor and singer Maurice Chevalier. While many of the roasts were initially only open to men — when Humphrey Bogart was roasted in 1955, his wife sent them a tape that played her message, “This is Lauren Bacall, the uninvited guest, you rat bastards” — they would later open their doors. Lucille Ball was roasted in 1962.

In 1998, the Friar’s Club partnered with Comedy Central to air the roasts on television. While the two have since parted ways, both organizations now regularly hold roasts of their own. Though more roasts may mean more humiliation, it’s a win for the rest of us: The more celebrities we get to see cringe, the better.

Read next: Watch Justin Bieber Apologize to His Roasters for His Past Behavior 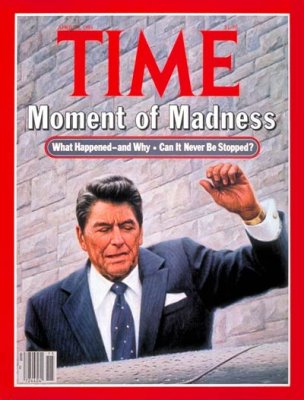 Read President Reagan's Best Jokes About Being Shot
Next Up: Editor's Pick