These 5 Facts Explain the State of Iran

Secretary of State John Kerry, Iranian Foreign Minister Javad Zarif and others wait for a meeting at the Beau Rivage Palace Hotel on March 27, 2015 in Lausanne, Switzerland.
Brendan Smialowski—Reuters
By Ian Bremmer

As leaders in the United States and Iran maintain laser focus on the ongoing nuclear negotiations, it’s valuable to take a broader look at Iran’s politics, its economy, and its relations with the United States. Here are five stats that explain everything from Iran’s goals in cyberspace to its views of Western powers.

1. Sanctions and their discontents

Sanctions have taken a heavy toll on the Iranian economy. According to the Congressional Research Service, Iran’s economy is 15 to 20% smaller than it would have been without the sanctions that have been enacted since 2010. They leave Iran unable to access nearly four-fifths of the $100 billion in reserves the country holds in international accounts. Iran’s oil output has fallen off a cliff. Four years ago, Iran sold some 2.5 million barrels of oil and condensates a day. Over the last year, the country has averaged just over a million barrels a day. Even as the exports have fallen and the price has plummeted, oil still accounts for 42% of government revenues. Iran’s latest budget will slash spending by 11% after accounting for inflation.

But despite the belt-tightening, Tehran has been willing to splurge in one area. Funding for cyber security in the 2015/16 budget is 1200% higher than the $3.4 million allotted in 2013/14. Up until 2010, Iran’s chief focus in cyberspace was managing internal dissidents. But after news of the Stuxnet virus—a U.S.-led cyberattack on Iran’s nuclear program—went public in 2010, Iran’s leaders shifted gears. According to one estimate, Iran spent over $1 billion on its cyber capabilities in 2012 alone. That year, it conducted the Shamoon attack, wiping data from about 30,000 machines belonging to Saudi oil company Aramco. In 2013, the Iranian Revolutionary Guard publicly declared that Iran was “the fourth biggest cyber power among the world’s cyber armies.”

The median age in Iran is 28, and youth unemployment in the country hovers around 25%. Nearly seven out of ten Iranians are under 35 years old, too young to remember the Iranian revolution of 1979. But the country is controlled by older men, many of whom had an instrumental role in the revolution. Supreme Leader Ayatollah Ali Khamenei is 75 years old; there have been concerns about his health and Iran’s eventual succession plan. Iran’s Assembly of Experts is an opaque institution with huge symbolic importance: it is tasked with selecting and overseeing Iran’s Supreme Leader. The Assembly’s Chairman passed away in October at the age of 83. His replacement? Ayatollah Mohammad Yazdi, who is…83 years old.

4. The feeling is mutual

Over 70% of Iranians view the United States unfavorably—and 58% have “very unfavorable” views. On the flip side, more than three-quarters of surveyed Americans have unfavorable views of Iran. But that’s a more modest stance than some other European powers: 80% of French and 85% of Germans have unfavorable views of Iran. According to recent polls, Iran is no longer considered “the United States’ greatest enemy today.” In 2012, 32% of those polled chose Iran, good for first place. In 2015, just 9% selected Iran, placing it fourth behind China, North Korea and Russia, respectively.

Negative views of Iran haven’t undermined Americans’ desire to try and cut a deal: 68% of Americans favor diplomacy with Iran. It’s a bipartisan majority: 77% of Democrats and 65% of Republicans are in favor of talks. Iranians have mixed expectations: only 48% think that President Rouhani will be successful in reaching an agreement. But if we do see a final deal, a lot more than Iranian oil could open up. Western businesses would love to break into a country that is more populous than Saudi Arabia, the United Arab Emirates, Kuwait, Qatar, Oman, Israel, Bahrain, Lebanon and Jordan combined. 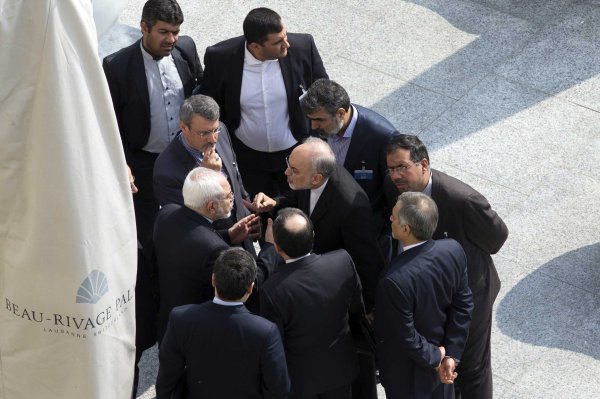 The Middle East Nuclear Race Is Already Under Way
Next Up: Editor's Pick