Pope John Paul II’s death on this day, April 2, ten years ago, brought an end to the second-longest Papal term (26 years and change) since Peter’s reign. But it could have been much shorter if a trio of unrelated assassination plots had been successful.

The first nearly was: In May 1981, less than three years after John Paul was elected, he was shot by a Turkish terrorist while riding in an open Popemobile, greeting visitors in St. Peter’s Square. According to TIME’s account, “The Pope had apparently been hit by two bullets, fired from only a few yards away. One shattered the two joints of the ring finger of his left hand, ricocheted and grazed his right arm. The other blasted into his abdomen, passing completely through his body and ripping up the Pope’s intestines but narrowly missing his pancreas, abdominal aorta and spine.”

Italian surgeons performed a white-knuckle, five-and-a-half hour surgery to save the Pope, removing several pieces of his intestine. When they were finished, the chief of surgery issued a cautious proclamation, per TIME: “The prognosis is reserved [because of the danger of infection], but there is hope that the Pope will recover and stay with us.”

He stayed, although his injuries would torment him for the rest of his life. And within a few days of the shooting, he had publicly forgiven his would-be assassin, Mehmet Ali Agca, who was pardoned by Italian officials in 2000 at the Pope’s request.

A year after Agca’s assassination attempt, the Pope visited the Basilica of Our Lady of Fatima in Portugal to “fulfill a vow of gratitude to the Virgin Mary,” per TIME, for having saved his life. As he climbed the basilica’s steps, a man lunged at him with a 16-inch bayonet. A security guard wrestled the man to the ground within an arm’s length of the Pope. This time, the assailant was an archconservative Spanish priest opposed to “the liberalizing reforms of the Second Vatican Council (1962-65), especially its modernization of the 16th century Latin Mass,” as TIME attests.

Even Al Qaeda once had John Paul in its sights. In 1995, when the Pope visited the Philippines to celebrate World Youth Day, Khalid Sheikh Mohammed (who later masterminded the Sept. 11, 2001, attacks) and two co-conspirators planned an assassination attempt that was foiled when a fire broke out in their apartment and authorities found bomb-making materials and other incriminating evidence, according to the Wall Street Journal.

The motive behind the most damaging attack — Agca’s — has never been firmly established. At first the shooter said he was acting alone, but later claimed he had been following orders from Soviet and Bulgarian secret services, according to Newsweek, which adds, “A 2006 investigation led by an Italian parliamentary commission corroborates said claim; the investigative team said the attack had been orchestrated by former Soviet Union leaders ‘beyond a reasonable doubt.’ ”

Pope John Paul II’s forgiveness alone may not have been enough to make him a saint, but it was remarkable enough to the world, and to Agca, when the Pope paid him a cordial visit in his Roman prison cell in early 1984. Thirty years later, not long after John Paul II’s canonization, Agca placed two dozen white roses on his tomb.

“A thousands thanks, holiness. This is a miracle that goes on,” Agca said in Italian, per Newsweek. 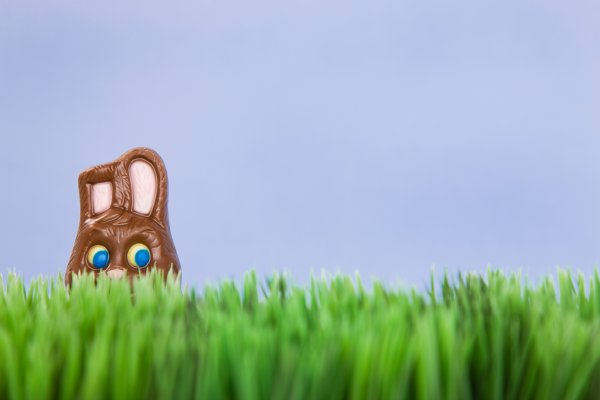 What's the Origin of the Easter Bunny?
Next Up: Editor's Pick