Liftoff! A Year in Space Begins

You’d think you’d have trouble deciding how to spend your last day on Earth if you were about to leave it for a year. But the fact is, you’d have nothing to decide at all. Every bit of it would be planned for you—literally second by second—as it was today for cosmonauts Gennady Padalka and Mikhail Kornienko and astronaut Scott Kelly, in advance of their liftoff at 1:42:57 AM local time. Kornienko and Kelly are set to be aboard the International Space Station for the full year; Padalko will be there for six months.

The three men were instructed to nap until nine hours before launch, or precisely 4:42:57 PM in Baikonur, Kazakhstan, where the Russian launch facilities are located. They left their quarters exactly one hour later, at 5:52:57 PM, settled into the space center ready-rooms and began their pre-flight preparations at 6:52:57. And on the day would tick.

For the families, all those hours were a much more ambling business—time they had to contrive to fill on their own. As Kelly was getting his final hours of mandated terrestrial sleep, his daughters, Samantha and Charlotte, 20 and 11, his partner Amiko Kauderer and his twin brother Mark—a retired astronaut—visited Baikonur’s outdoor market in a hunt for spices Kauderer and the girls wanted to take home. Mark, who had arrived in Baikonur yesterday still wearing his characteristic mustache—the only thing that allows most people to distinguish between him and Scott—had shaved it off this morning.

“Do I look like my brother now?” he asked, and then added mischievously, “Maybe I am…”

Kauderer, who works as a NASA public affairs officer and has witnessed her share of launches as well as her share of spouses steeling themselves—at least outwardly—for the experience, carried herself with the same apparent calm. So did the girls, who have seen their father fly off to space three times before. As for what Scott himself was feeling, Mark was reasonably sure it was nothing terribly special.

“He’s been through this routine four times already,” he said. “Actually, when you count the times you don’t launch, it’s probably six or seven.”

That routine pressed on today regardless of what Scott might or might not have been feeling. At 7:52 PM, the crew, still clad in Earth-appropriate jumpsuits, left the ready-rooms for the 100-yard walk to the buses that would take them to the suit-up building. A rousing Russian song played over loudspeakers, while crowds were kept behind rope lines, both to prevent a crush and protect the astronauts who, though walking without surgical masks, were still under medical quarantine.

Once they were sealed inside their bus, however, the lines collapsed and the crowd surged forward. A child was lifted to touch the window. Padalko pressed both of his hands on the glass while a woman reached up and pressed hers opposite. In Russia—if not in the U.S.—cosmonauts are every bit the cultural phenomena they were half a century ago.

No one outside of flight technicians saw the crew again for another two hours—until they had been suited up and the families were brought in for a final goodbye—the men leaving the Earth on one side of a glass and the loved ones staying behind on the other, communicating via microphones. “Poka, poka”—Russian for “bye-bye”—Padalko’s daughters called to him again and again.

Mark, who made two visits to the space station on his shuttle flights, was less sentimental in bidding farewell to his brother. “I left some old T-shirts up in the gym,” he said. “Want to bring them down for me?”

“You look good without that mustache,” Scott answered.

“Yeah, I’ll probably grow it back on the flight home. I miss it already.”

Scott’s exchanges with Amiko, Charlotte and Samantha were less playful, more tender, and afterwards, when Roscosmos officials declared the five minutes allotted for the visit over, Amiko gathered the girls in a hug. “We have to hold it together,” she says. “That’s our job, to hold it together and to help him.”

Finally, family, media and space officials left the suit-up building and walked to the parking lot just outside. The crew emerged a few minutes later to a fusillade of camera flashes and walked to three designated spots painted on the asphalt. American, Russian and Kazakh flags fluttered behind them and Roscosmos officials stood before them, bidding them a final goodbye. Padalko, the commander, stood in the middle during the little ceremony, and he occupies the middle seat in the spacecraft as well. A Soyuz veteran, he has joked that he could fly the craft with nothing but a pair of cabbages in the seats on either side of him.

Maybe. But if he meant that in the months and years he was training for this flight, there was no sign of it on the night he left. The crew, who would depend on one another for their lives tonight, boarded their bus, drove to the pad and climbed into their spacecraft. Two and a half hours later, at the designated second, their Soyuz rocket’s 20 engines lit and they left Kazakhstan—and the planet—behind them.

TIME will be covering Kelly’s mission in the new series, A Year In Space. Watch the trailer here. 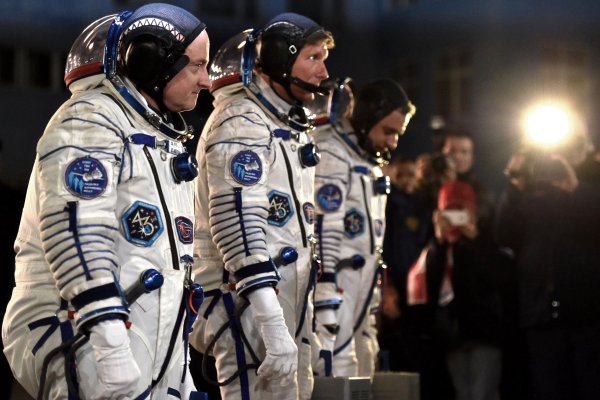 We Have Lift-Off
Next Up: Editor's Pick