Bad movies: they can be tatty classics of crazed ineptitude, like Edward D. Wood’s Glen or Glenda and Plan 9 from Outer Space, or big-budget misfires like the 1987 Ishtar, a would-be comedy that sent Warren Beatty and Dustin Hoffman on a Hope-Crosby Road to Dystopia. Michael Cimino’s Heaven’s Gate, a “bad movie” that practically torpedoed its sponsoring studio, United Artists, is actually often a great one — anyway, much of it errs on that side — but in “gate” notoriety it’s up there with Richard Nixon’s Water-, Bill Clinton’s Monica- and Chris Christie’s Bridge-.

Connoisseurs of bad movies are looking for bold wrongness: the urgency of a child screaming its lungs out with what may be madness or a hint of genius. But another type of certifiably awful movie just sits in a corner muttering about issues that neither it nor any spectator can care about. Such a one is Serena, Danish director Susanne Bier’s DOA adaptation of Ron Rash’s 2008 bestseller. Filmed in 2012 and finally limping into theaters after a few weeks on VOD, Serena fails in ways that are fun neither to sit through nor to write about.

The picture would barely be worth an obit except for its leading actors, Bradley Cooper and Jennifer Lawrence. They made ideal wounded sparring partners (and ballroom dancers) in Silver Linings Playbook. They flirted with malicious intent in American Hustle. They’re big stars, frequent Oscar nominees and, from available evidence, decent people for whom one wishes the best. And somehow they stumbled into a muted kind of worst: the story of a North Carolina lumberman and his Colorado bride, in an effort that has star wattage up the wazoo but zero emotional voltage.

George Pemberton (Cooper) is a powerful rogue employing any means necessary to battle government regulations in the first years of the Great Depression. He must also cope with his new wife’s knowledge that, before they met, he fathered a child with a local girl (Ana Ularu). Serena (Lawrence) says that nothing in the past matters; but that’s just the cooing lie of a femme fatale — the type that Barbara Stanwyck brought to seductive life and death in Hollywood’s Golden and Noir ages.

Iconographically, Lawrence looks just right for the period. Platinum blonde, she instantly evokes such early-talkies actresses as Mae West. Toby Wing and Jean Harlow. Too bad she gets no help from Bier, who won a Foreign Film Oscar in 2011 for the Danish In a Better World after a calamitous foray into Hollywood drama with the 2006 Things We Lost in the Fire.

Foreign-born directors, from Billy Wilder to Alejandro González Iñárritu, can be the most acute observers of American ways and mores, but Bier lacks either the empathy or the simple competence to establish a forboding tone and bring the Serena story to pulsing, plausible life. The movie was shot in Prague, not in the American South, but distance is no excuse for disaster. The Anglo-Italian Anthony Minghella filmed a dark Carolina love story, the 2003 Cold Mountain, in Romania and still managed to extract plenty of Tar Heel kick from his Civil War epic.

In Serena, stuff happens, then nastier stuff, without ever engaging the viewer’s rooting interest or sick fear. Sometimes it’s a question of sloppiness on the set or in the editing room. In one intense scene with Cooper, Lawrence provides the money shot of a tear coursing down her cheek. In the next closeup, her face is dry, suggesting that no one noticed or nobody cared.

Behind this inert movie is the shadow of a better, or at least creepier, one. Serena was originally to star Angelina Jolie and be directed by Darren Aronofsky immediately after he made Black Swan — a movie that reveled in the display of a sympathetic woman going toxically bonkers. Black Swan shared some of those excesses, but its vigor gave it a liveliness he might have applied to the Serena project. Bier’s directorial timidity spells doom.

It’s like some fateful old Broadway tryout that should have closed in New Haven. In fact, Serena opened last Oct. at the London Film Festival. Lawrence graciously showed up, beckoning the audience to embrace the movie. “And if you don’t,” she added, “just don’t tweet about it.”

The more appropriate social medium would have been Grumblr, the Tumblr spinoff that, like Serena, suffered an early death in 2012. This weekend’s theatrical premiere marks only the sighting of a glamorous zombie — a movie that is a poignant subspecies of bad: just plain sad. 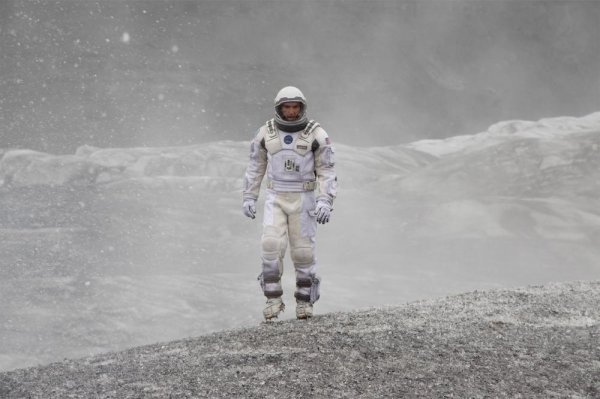 Watch How the Interstellar Team Created Those Terrifying Dust Storms: Exclusive
Next Up: Editor's Pick