On Thursday, French prosecutors claimed that Lubitz, who friends say was “rather quiet,” “polite” and “fun,” intentionally crashed Germanwings Flight 9525 on Tuesday, killing himself and the 149 other individuals onboard.

Investigators raided Lubitz’s apartment along with his parents’ home in Montabaur, Germany, this week, as they clamored to shed some light on why or what drove the 27-year-old co-pilot to commit mass murder.

Germany’s Interior Minister Thomas de Maiziere said there is no evidence to suggest that the co-pilot had any links to a terrorist organization.

“According to the current state of knowledge and after comparing information that we have, he does not have a terrorist background,” said Maiziere.

Officials from Germanwings’ parent company, Lufthansa, said Lubitz had completed all the criteria required to pilot a commercial aircraft and appeared to be both mentally and physically fit. A security probe last vetted Lubitz in January; however, nothing unusual appears to have come up during the routine inquiry, reports the Associated Press.

“The pilot has passed all his tests, all his medical exams, “ Carsten Spohr, Lufthansa’s CEO, told CNN. “All the safety nets we’re so proud of here, have not worked in this case.”

Lubitz, a lifelong aviation enthusiast, first enrolled in the Lufthansa’s pilot program in 2008 and trained in Germany and Arizona. The 27-year-old later joined Germanwings as a pilot in 2013 and logged 630 flight hours on the A320 before this week’s crash.

On Thursday, Lufthansa confirmed that the co-pilot had briefly interrupted his training course about six years ago. The airline said they are still investigating what may have led to that brief hiatus.

Regardless, aviation experts say pilots are thoroughly tested and other crew members are supposed to remain vigilant when it comes to making sure their fellow pilots are fit to fly.

“Every time they fly, there’s always another pilot doing an assessment. So if one pilot thinks another pilot is going weird, that pilot has a responsibility to report that,” Jason Middleton, an aviation professor at the University of New South Wales in Sydney, tells TIME. “Weirdos and people with mental illnesses are pretty well filtered out.” 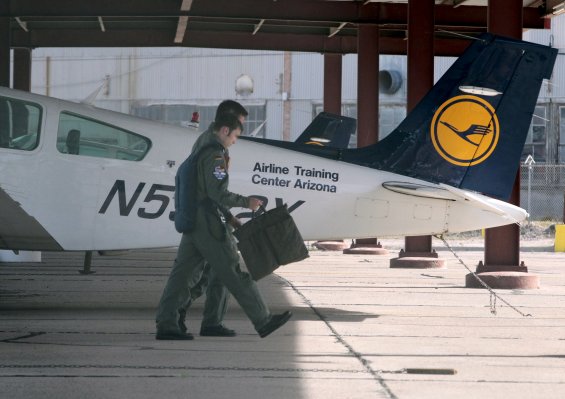