How the Germanwings Co-Pilot Was Able to Lock Himself In

The fatal crash of a German airliner in the French Alps, apparently a deliberate act by the plane’s co-pilot, seems to have been made possible by security measures brought in following the Sept. 11 terrorist attacks intended to make air travel safer.

On Thursday, French officials said it appeared as if co-pilot Andreas Lubitz had deliberately downed Germanwings Flight 9525 by locking the cockpit door and refusing to allow the captain back inside. The crash killed all 150 on board.

If that is what happened, it would be an indirect result of tightened security measures implemented by airlines in the U.S. and around the world in the aftermath of 9/11, when 19 hijackers overcame crew and passengers and flew the planes into buildings in New York and Washington D.C.

In 2002, the FAA announced higher standards to protect pilots. Cockpit doors in airliners were made stronger while remaining locked throughout the flight. The FAA also mandated internal locking devices inside the cockpit to preventing someone from entering. But those restrictions, meant to prevent similar hijackings, may also have allowed Lubitz to prevent someone else from entering the flight deck as he piloted the jet into a mountainside.

“The procedures put in place to prevent one bad thing from happening facilitated another bad thing happening,” says Jeff Price, an aviation management professor at Metropolitan State University of Denver.

On an Airbus A320, a locked cockpit door can be opened through a nearby keypad—as shown in this Airbus video—but that can be overridden by an individual still inside the cockpit via a switch that can keep the cockpit door locked. “That act of fully locking the system down has made this event possible,” says aviation expert Chris Yates. “Pilots use that access keypad to wander into the cockpit anytime they choose, but it can be overridden from inside, and that seems to be the problem.”

Yates says one way to potentially avoid a similar situation would be to take out the locking mechanism altogether. But a simpler fix might be for all airlines to do as the U.S. has done since 9/11 and require a flight attendant to be inside the cockpit if one of the pilots is away. While some carriers have already begun doing this since the crash, many in Europe and across the world still don’t mandate it.

“U.S. airlines have been doing this since 9/11,” Price says. “And if the pilot decides to commit mass murder, there’s somebody else up there to open a door or notify somebody or take some sort of action.”

MORE How Pilots Are Screened for Depression and Suicide

Thomas Anthony, the director of the University of Southern California Aviation Safety and Security program, says there’s no one fix that would help prevent a similar incident. For any aviation mishap, he says, there are always four or five contributing factors, citing the Airbus’s strengthened cockpit doors as well as less interchange between the cabin crew and the flight crew, which he says has created a more isolated environment inside the cockpit. And he thinks any investigation into the downing of the German airliner will attempt to address this sort of insider threat.

“Every security measure that is taken has a price and often an unintended consequence,” Anthony says. “But I expect this will be a watershed event.”

Read next: Germanwings Plane Crash: We Could Be Doing Much More To Prevent Pilot Suicide 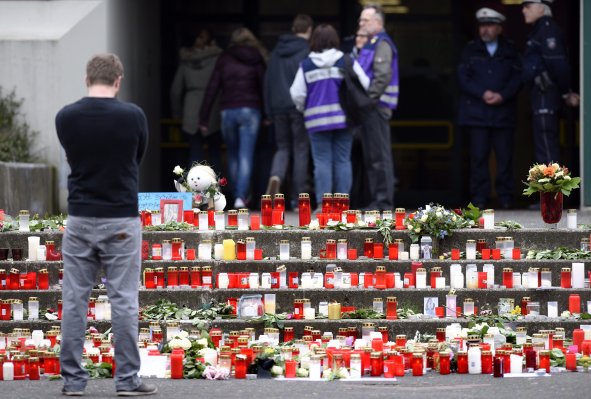