The Varsity Sport of the Virtual World

On a recent March afternoon, just as the NCAA men’s basketball tournament is beginning its annual run near the top of the TV ratings, another group of student-athletes are inside a downtown Chicago building, casting spells. These two dozen members of the “e-sports” team at Robert Morris University tap their keyboards and right-click their mice at warp speed, honing their skills at League of Legends, a five-on-five battle game won by the first team to destroy a glowing tower called the Nexus.

This is no idle diversion. Robert Morris is the first college in the U.S. to make video gaming a varsity sport like soccer or basketball. Top players can receive athletic scholarships worth up to $19,000 per year. Which means that many of these twitchy-fingered students are getting the same sort of subsidized education as the hoops phenoms playing in March Madness. “My parents were always telling me to get off the Xbox,” says Jonathan Lindahl, a freshman e-sports player. “So I’m really rubbing it in their faces.”

In fact, many aspects of the Robert Morris e-sports team take their cue from big-time college athletics. The Eagles–the team has the same mascot as the school’s other varsity sports–practice up to five hours a day in the iBuypower E-Sports Arena, a classroom that was converted into a gaming center. Robert Morris, a commuter school based in downtown Chicago with fewer than 2,500 undergraduates, sold the naming rights to the room for an amount that school officials described as more than five figures. During tournaments and even practice, the team wears jerseys with logos of sponsors on the sleeves. And whereas a picture of a legendary coach may hang in some gyms, here the athletes play under a portrait of a blue ghost with jet black hair flowing to her waist. This is League of Legends warrior Kalista, the Spear of Vengeance, an “eternal spirit of retribution.”

All these parallels to the real moneymakers in college athletics are by design, and in some ways the commercialism is even more overt. Competitive video gaming is a multibillion-dollar global business, with pro championships streamed last summer by ESPN. The current generation of college students grew up playing interactive online games, and many continue to play in school. As a result, hundreds of colleges have formed organized gaming teams, many as campus clubs. The Collegiate StarLeague, which counts not only Robert Morris but also Harvard and Stanford among its ranks, has swelled this year to almost 450 schools and more than 10,000 players. And college gaming now has its own major spring tournament.

On March 28, Robert Morris will compete against 15 other finalists–including established sports powers like the University of Michigan, Georgia Tech and Texas A&M–in the North American College Championship (NACC). The “Final Four” is May 2–3 in Los Angeles; each member of the championship team will receive $30,000 in scholarship money. Since college gaming is not governed by the NCAA and its strict definition of amateurism, e-sports athletes can get cash and other direct benefits from companies.

Another school is already following Robert Morris’ lead. The University of Pikeville, a private liberal-arts university in Kentucky, will begin offering e-sports scholarships in the fall. And Kurt Melcher, the Robert Morris associate athletic director who first proposed the video-game idea, says he’s heard from about 30 schools–a few with well-known athletic programs–about starting an e-sports team.

Colleges already support a variety of unexpected competitions: some offer chess scholarships, others have bass-fishing teams. But Robert Morris seemed to have pushed the student-athlete limits when it launched its varsity e-sports program this fall. School president Michael Viollt says he took plenty of criticism from his colleagues. “They thought that it was a ploy outside the bounds to get attention,” he says. He insists that gaming can provide the same life lessons, in areas like teamwork and discipline, as traditional sports such as football and basketball. Besides, Robert Morris offers financial aid to painters, band members and dancers. Why not Nexus destroyers? “These guys have to learn to communicate with one another, in clear and concise patterns, and take leadership positions,” says Viollt. “We took them out of the basement.”

From College to the Pros

E-Sports began their rise in South Korea, after the Asian financial crisis of the late 1990s. As a recovery strategy, the South Korean government invested in telecom and broadband infrastructure. This faster new network gave young people widespread access to online games like the early multiplayer hit StarCraft. Internet cafes, called PC bangs, evolved into gaming clubs, and before long South Korea had a TV station dedicated to e-sports. In 2000, the government created the Korea E-Sports Association, which is now affiliated with the Korean Olympic Committee.

What began in South Korea has since spread around the world. Some 93 million people, mostly online, will watch an e-sports event in 2015, according to SuperData Research, up 30% from 2013. The firm, which sells its research to gaming companies, says U.S. e-sports viewership has more than doubled in the past two years, from about 20 million in late 2012 to 42 million today. The maker of League of Legends says more than 32 million global viewers tuned in to the game’s pro World Championship in October 2013, eclipsing the domestic audience of 26.3 million for Game 7 of that year’s NBA Finals. The 2014 championship drew 40,000 fans to the soccer stadium in Seoul that hosted World Cup games.

This attention has turned top gamers into commodities. At the championships for the multiplayer battle game Dota 2 last July in Seattle, the five players from the winning Chinese team each took home a $1 million prize. And in 2013, the U.S. started granting professional-athlete visas to foreign e-sports players.

Services that stream e-sports–like Twitch, which Amazon bought for almost $1 billion in 2014–have become the sports bars of the video-gaming world. Players use the chat rooms to find partners and watch other gamers face off. “These events have replicated the traditional way of celebrating sports,” says Joost van Dreunen, CEO of SuperData Research. “The growth is very much driven around fans and communities. Even in a digital virtual reality, people are looking for each other in real life.”

The boom has trickled down to the college ranks, fueled by student interest and an industry that knows a good market opportunity when it sees one. Much like the way athletic-gear companies such as Nike and Adidas infiltrated traditional scholastic sports, video-game companies are helping underwrite the college gaming explosion. Riot Games, creator of League of Legends, is offering $360,000 in total scholarship money to players who make this year’s collegiate Final Four, more than tripling last year’s prize. Blizzard Entertainment, maker of StarCraft, is running a 64-team collegiate tournament for a new game, Heroes of the Storm. ESPN will televise the finals–dubbed Heroes of the Dorm–and each member of the winning team will get up to three years of tuition, for a maximum of $75,000. Teams from over 650 colleges have tried to qualify. The tournaments are sure to help sales.

“College e-sports will galvanize the whole industry,” predicts Ian Sharpe, CEO of e-sports streaming company Azubu. “College matchups are a driving force in the evolution of games into a sport. Supporting your college throughout your life is part of our identity, and the battles of those identities are going to be good for e-sports, because it creates a rootedness.”

The Robert Morris program embodies the tight relationship between e-sports teams and the gaming industry. Among the logos plastered across the iBuypower E-Sports Arena: Asus, “the official monitor of the Eagles”; Pwnit Wear, maker of the team’s shirts and sweats; Cooler Master, which provided mice and keyboards; and DXRacer, which supplied 40 ergonomic chairs, worth about $14,000.

The clearest sign that e-sports have truly arrived on the college level, however, may be that a student has already caused discord by ditching school for the pros. In November, just a few weeks after arriving at Robert Morris, Adrian Ma, 18, left to join Team Impulse in the North American League of Legends Championship Series. Though Ma wouldn’t reveal his earnings, he says pro League of Legends players typically earn about $4,000 a month. “The opportunity was too good to pass up,” says Ma. “The LCS is a dream.”

About a week and a half before the start of the NACC tournament, Robert Morris is preparing for an evening scrimmage–or scrim, in gaming parlance–against an amateur team. “We have Kog’Maw, Lulu, Nunu, we have enough magic,” junior Blake Soberanis calls out, shorthand for the League of Legends characters–called champions–that his team will use in the game. The school had connected the players with an e-sports psychologist, and Soberanis keeps open the notes he took during a session: “FLOW STATE–focused 100% on the now, on the self, on the task … Take away the reason you would choke = FEAR.”

Soon a colorful wave of minions, monsters and champions skitter across the screens as players chatter over their headsets. “Let’s go, move up,” Soberanis says. “We can cut her off, we can cut her off,” says Derek Shao, a junior teammate. Robert Morris destroys the Nexus about 20 minutes later, giving the team an easy win.

Afterward, Ferris Ganzman, Robert Morris’ head coach, sends off a spreadsheet with his match notes. “We lack vision top side entirely,” Ganzman, who repairs hospital equipment by day, writes in one section. “Good job pressuring all lanes,” he writes in another. An assistant coach, attorney Jason Greenglass, offers oral feedback. “You need to say that’s a bad call,” he says while watching a replay. “Remember to have that voice.”

Around 8 p.m., the team calls it a night, and Soberanis and Shao head back to the dorm room they share with two teammates. A copy of The Art of War lies on one table. “Know yourself, know your opponent–it translates pretty well,” says Soberanis. Tubs of creatine and whey protein sit near Shao’s computer–for mental focus, he says. Neither has class in the morning, yet they’re planning to stay in and play even more League of Legends.

With e-sports, as long as you’re connected, the lights are always on. The gym is always open. “As we get closer and closer to the tournament, it’s do or die,” says Soberanis. “Now’s not the time to take a break.” 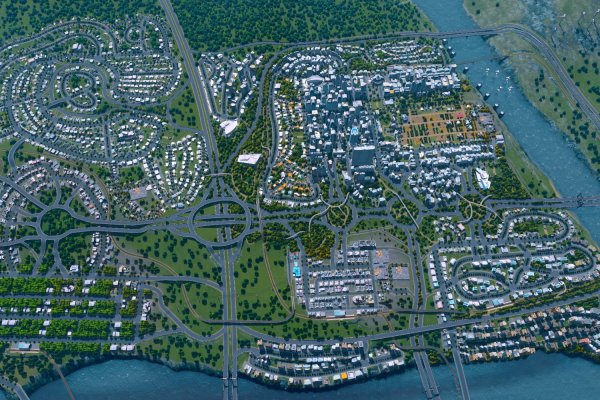 5 Reasons You Need to Check Out Cities: Skylines
Next Up: Editor's Pick