Army to Try Sgt. Bowe Bergdahl for Desertion and 'Misbehavior'

The Army had little choice other than to charge Sergeant Bowe Bergdahl with desertion. Otherwise, it faced an insurrection in the ranks, corrosion of discipline—or both.

“Bowe Bergdahl is a coward,” says Rob Kumpf, a one-time Army sergeant who served in Afghanistan and Iraq. It is a refrain echoed by many active-duty troops, although Bergdahl has yet to tell his side of the story publicly. “While I strongly believe that we, as Americans, are duty bound to never leave one of our own behind,” Kumpf says, “I strongly hope that the government does what it needs to do to punish Mr. Bergdahl for his crimes.”

Bergdahl fell into Taliban hands in Afghanistan in 2009 after he reportedly became disillusioned with the war and walked away from his combat outpost. He was released after five years in captivity in a controversial exchange for five detainees being held at Guantanamo Bay, Cuba. The Army announced Wednesday that he is being charged with desertion and misbehavior before the enemy. A preliminary hearing could lead to a full-fledged court martial.

Ralph Peters, a retired Army lieutenant colonel, hailed the action. “My Army showed some backbone,” he says. “At least some of our generals have spines.”

The Army’s decision is gutsy, on two counts: first of all, it holds the White House, which celebrated his release with a Rose Garden ceremony featuring President Obama and Bergdahl’s parents, up to ridicule.

Secondly, it means the Army could have to explain why it accepted Bergdahl as a soldier two years after he washed out of Coast Guard basic training, normally a red flag for recruiters.

While the desertion charge carries a maximum of five years imprisonment (only in a declared war can it carry the death penalty), the misbehavior charge could lead to a lifetime prison sentence. “The second charge—which is similar to ‘aiding and abetting’ in civilian parlance—suggests to me that we have strong evidence that Bergdahl may have given the Taliban important tactical information, or have otherwise been helpful to them,” Peters says.

While Bergdahl’s legal team didn’t respond directly to the charges in a statement it issued, it asked “that all Americans continue to withhold judgment until the facts of this case emerge.” Pentagon officials suggested a plea deal might avoid a public court-martial.

The Army faced grave consequences if it elected not to pursue the charges against Bergdahl. “The decision to court martial Bergdahl was probably the only one that the Army could make,” says Gary Anderson, a retired Marine colonel who served as a civilian adviser in Afghanistan and Iraq. “Any army has to have discipline at its core, and he is accused of deliberately leaving his post which endangered those soldiers who had to go look for him.”

Soldiers have alleged (although the Pentagon has said it can’t confirm) at least six U.S. troops died in clashes with the Taliban while hunting for Bergdahl after he went missing and was seized by the Taliban in Paktika province on June 30, 2009. “Bergdahl’s walking away was a large factor contributing to my son’s death,” Andy Andrews of Cameron, Texas, told TIME after Bergdahl’s release. His son, 2nd Lieutenant Darryn Andrews, was killed by an RPG September 4, 2009, while protecting a fellow soldier. They had been on a routine patrol near where Bergdahl vanished, and had been asking locals about him when they were attacked. “Sergeant Bergdahl is not a hero, and my son—who sacrificed himself to save others—was a hero,” Andrews said.

The Taliban released Bergdahl last May in a controversial trade for five Taliban detainees the U.S. was holding at Guantanamo Bay, Cuba. Both Republicans and Democrats on Capitol Hill criticized Obama for not informing them of the trade before it happened. Soldiers in Bergdahl’s unit kept quiet about his disappearance until the White House ceremony heralding his return to the U.S.

“I think he abandoned his post while the other four soldiers were asleep,” Greg Leatherman, Bergdahl’s former squad leader, told TIME after Bergdahl returned to U.S. soil (he has spent much of his time since at a San Antonio, Texas, Army post, where his preliminary hearing will be held at a yet-to-be-specified date). “He was a loner, he didn’t like to share much with anyone. Read the Koran quite a bit, which I respected. I saw it as him trying to be a better soldier, learning more about the people we were going to work with,” Leatherman said. “Turns out he was preparing.”

Charles Jenkins’ fate illustrates what Bergdahl might face, if the pre-trial hearing announced Wednesday leads to his eventual conviction at court martial. Jenkins deserted his Army unit in South Korea in 1965 and lived in North Korea until 2004. He ultimately pleaded guilty to charges of desertion and aiding the enemy. He received a dishonorable discharge, was stripped to the Army’s lowest rank, forfeited all pay and benefits, and was sentenced to 30 days in prison (he got out six days early for good behavior). He now lives in Japan.

But Jenkins was 64 when sentenced (Bergdahl turns 29 Saturday) and no one allegedly died trying to find Jenkins after he headed north through the Demilitarized Zone one freezing January night nearly 50 years ago.

The case also poses some risks for the Army itself. Bergdahl was discharged early from the Coast Guard, after only 26 days in boot camp in 2006, two years before he tried to enlist in the Army. The Coast Guard described the action as an “uncharacterized discharge,” which is typical for someone who leaves the service without completing basic training.

Generally such an event would have required a waiver from the Army before allowing such a prospective recruit to enlist. A wide variety of bars to enlistment—including legal problems and health concerns—require waivers because the Pentagon believes such recruits won’t do as well in uniform as those without such warning signs.

In 2008, the year Bergdahl joined the Army, the service granted waivers for about 20% of its recruits, usually for illicit drug use or other legal problems. Such waivers spiked as popular support for the wars in Afghanistan and Iraq sagged and the Army found it more difficult to entice young Americans to enlist.

Read next: The Desertion Charge for Bowe Bergdahl Was Months in the Making 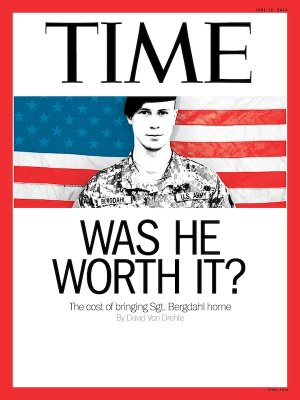 The Desertion Charge for Bowe Bergdahl Was Months in the Making
Next Up: Editor's Pick