People flee after a gunfire on a street in the southern port city of Aden, Yemen, on March 25, 2015
Yassir Hassan–AP
By Jared Malsin

Shi‘ite rebel militias forced Yemen’s President to flee the country as they advanced on the southern port city of Aden on Wednesday, in a move that threatens to tip the country into full-scale civil war.

Yemen’s U.S.-backed President Abdel Rabbo Mansour Hadi fled Aden by boat on Wednesday, according to officials cited by the Associated Press. The state television network, now controlled by the Houthi rebels who seized control of the capital in September, announced a $100,000 bounty for Hadi’s capture.

The Houthis are mostly members of a Shi‘ite sect from the country’s north, and their decision to stage an offensive into the south is likely to further inflame tensions between the two regions, which in turn could also provide a recruiting boon for al-Qaeda in the Arabian Peninsula (AQAP), the extremist group’s Yemen-based affiliate.

“As soon as the Houthis declare victory, then the real fighting will start, which is guerilla resistance across the south,” said Abdul-Ghani al-Iryani, a Yemeni political analyst in the capital, Sana‘a. “There are big questions that pertain to the survival of Yemen as a unified state.”

The Houthis stormed Sana‘a in September 2014, seeking greater representation in Hadi’s government. The President resigned in January and later fled to Aden to declare a rival government. The rebels are now allied with army units loyal to former president Ali Abdullah Saleh, who stepped down in 2011 following a pro-democracy uprising in 2011, but was allowed to remain in the country. Late on Wednesday, gunfire could reportedly be heard across the city of Aden as the rebel fighters sought to grain ground there.

The worsening violence in Yemen’s south could also turn into a wider regional conflict. Saudi Arabia moved heavy military equipment to its border with Yemen this week, perhaps out of concern that its neighbor might fall under the influence of Iran, the regional Shi‘ite powerhouse which has reportedly been arming and funding the rebels. Hadi’s government has also appealed for military intervention by other Arab states. The Arab league is set to discuss the plea on Thursday.

The offensive in the south will also empower extremist groups there, analysts say. AQAP, a sworn enemy of the Houthis, which controls territory there, is likely to position itself as the vanguard of resistance to the Houthi presence. Sunni tribes in southern Yemen, who argue that they have been marginalized by the capital since the unification of north and south Yemen in 1990, may be tempted to join the group’s ranks. “AQAP has been pushing a very sectarian narrative. It helps them do recruiting along sectarian lines,” said Adam Baron, a Yemen analyst and visiting fellow at the European Council on Foreign relations.

That doesn’t bode well for the wider world, either. AQAP is among al-Qaeda’s most lethal franchises, and claimed responsibility in January for the deadly attack on the satirical newspaper Charlie Hebdo. As a result, the Yemeni affiliate has been a recurring target for the U.S. military and foreign intelligence operations, including unmanned drone strikes that have killed civilians, a source of resentment among Yemenis. But the U.S. forces won’t be able to use Yemen as a launchpad for counterterrorism operations any more; Washington evacuated all its personnel from the country on March 21 as conditions deteriorated. That leaves few obstacles to hinder AQAP’s growth.

“All the ingredients are there on the ground for al-Qaeda to grow and flourish and recruit,” said Nadwa al-Dawsari, a Yemeni conflict analyst. “They will find a lot of recruits among frustrated southern people, southern youths, southern tribes. It’ll get ugly.”

Read next: Yemen Leader Asks U.N. to Back Military Action Against Rebels 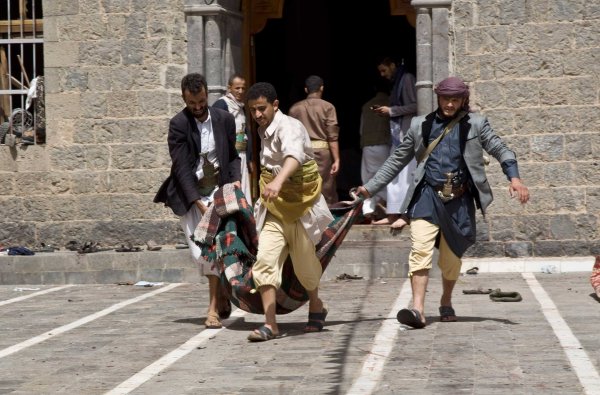 ISIS Claims Role in Yemen Attack, But Doubts Persist
Next Up: Editor's Pick