Katie Couric on A New Documentary, Her New Job and the NBC Rumor Mill

How did the nonprofit you co-founded, the Entertainment Industry Foundation’s Stand Up to Cancer, get involved with the PBS series premiering March 30?

Cancer has been life-­shattering for me on more than one occasion. My husband died of colon cancer in 1998. My sister died of pancreatic cancer three years later. Laura Ziskin, one of my co-founders, died of breast cancer. She’d read an advance copy of Dr. Siddartha Mukherjee’s The Emperor of All Maladies and immediately said, “We have to turn this into a documentary.”

Many people touched by cancer get overwhelmed or tune it out. Why do you return to it again and again?

Everyone has a different reaction to cancer. My husband, who was one of the most intellectually curious people I’d ever met, didn’t want to know much. As someone who loved him, my impulse was to protect him. My journalistic instincts also kicked in. I learned everything I could. After he died, I realized I had this built-in bully pulpit and it would be almost criminal not to share what I’d learned.

Do you do anything weird to stay healthy?

I wish I drank, like, copious amounts of green tea. I’m just not one of those maniacally healthy people. I try to say no to french fries. I’m very good about getting screened, about getting mammograms.

You’re Yahoo’s Global News Anchor now. What have you learned from Marissa Mayer?

I think you learn to keep your blinders on, focus on the job at hand and ignore the noise. Marissa is very good at that.

What makes a good anchor?

Someone who’s experienced and who has credibility. When I came to CBS, people said I lacked gravitas, which was frankly an unfair assessment. I had probably done more interviews than most of the sitting anchors, and certainly my share of hard-hitting ones. I always said “gravitas” was Latin for “testicles.”

After the Brian Williams ordeal, some people said anchors face pressure to get in the trenches or be part of the story. Did you ever feel that?

It’s a very hard balance, because there are stories that warrant the anchor being there, but you also have to be cognizant that it not be as window dressing. You have reporters out there, day in and day out, covering a story, and then you have an anchor parachute in. You hope whoever that anchor is brings something to the table.

Every couple of months, there’s a new rumor you’re going back to NBC—

I know, I know. It’s very disconcerting and bizarre to be the focus of stories that just have no factual basis.

So is there any truth to it?

No. No, no. Listen, I love NBC and I spent 15 wonderful years there. I still have a lot of friends there. But right now I’m really excited about the work I’m doing at Yahoo. It’s wonderful to feel entrepreneurial. As a friend of mine said, it’s great to be part of a place that’s expanding optimistically instead of managing decline.

Pope Francis. He’s such a transformative figure. He has expressed some attitudes of tolerance and compassion and some Jesuit values that I really admire.

Gossip sites ran some photos of you and your husband in swimsuits recently. How did that feel?

Oh my God, that was awful. I took some time off with my husband, and I look out and there are three big, huge cameras. I’m a 58-year-old woman. My heart sank. I guess it’s part of the fine print of having a public job, but I hope women out there everywhere felt my pain. 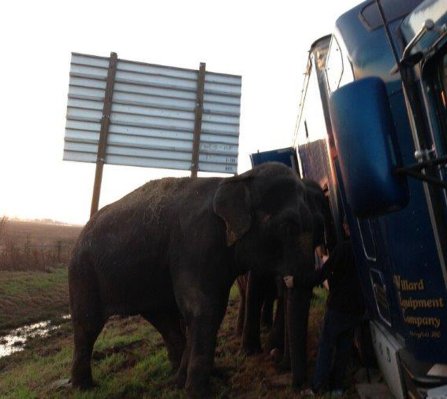 See Elephants Stop Truck From Overturning After It Gets Stuck in Mud
Next Up: Editor's Pick