A health worker prepares a vaccination on March 10, 2015 at a health center in Conakry during the first clinical trials of the VSV-EBOV vaccine against the Ebola virus.
CELLOU BINANI Cellou Binani—AFP/Getty
By Alexandra Sifferlin

An efficacy trial for an Ebola vaccine launched in Guinea on Wednesday.

The vaccine, VSV-EBOV, was developed by the Public Health Agency of Canada and has already shown positive results in smaller safety trials. NewLink Genetics and Merck are collaborating on the vaccine, and the Guinean government and World Health Organization (WHO) are leading the trial, which is taking place in Basse-Guinée, a community where many Ebola cases spread.

The trial is using what’s called a “ring vaccination” strategy, which means that when a person is infected with Ebola, a group, or ring, of their contacts will be vaccinated. Some of the contacts will be vaccinated immediately, and some will be vaccinated three weeks later. The format was chosen so that everyone could get the vaccine, instead of giving some people a placebo. The hope is that the people who are vaccinated will create a “ring of immunity” from the virus, which could prevent its spread. Similar strategies have been used for smallpox, according to the WHO.

The trial plans to vaccinate 10,000 people in 190 rings in the next six to eight weeks, and all of those vaccinated will be followed for three months. The trial is voluntary, and researchers estimate that results may be available in July.

“We are committed to ending this epidemic,” said Dr. Sakoba Keita, the national coordinator of the Ebola fight in Guinea, in a statement. “Combined with control measures that we are putting in place with our partners, a safe and effective vaccine will allow us to close this trying chapter and start rebuilding our country.”

A total of 3,429 people have been infected with Ebola in Guinea, and 2,263 have died. The country recently experienced an uptick in cases. 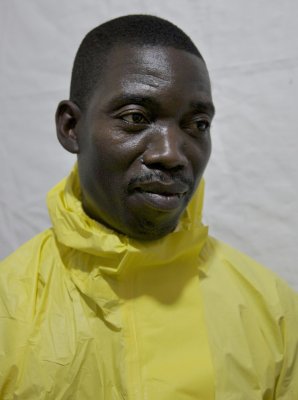