Jeremy Clarkson Ditched by BBC Over Attack on Producer

The 54-year-old auto journalist and presenter was suspended after he allegedly tried to punch a producer, which the BBC originally dubbed a “fracas.” The broadcaster announced Clarkson’s suspension in a statement on Mar. 11, saying: “Following a fracas with a BBC producer, Jeremy Clarkson has been suspended pending an investigation. No one else has been suspended.”

It quickly emerged that Clarkson struck the Top Gear producer, Oisin Tymon, after filming in a Yorkshire hotel and learning he wouldn’t be served a hot steak meal — though the BBC didn’t initially define “fracas.”

Following an internal investigation led by the director of BBC Scotland Ken MacQuarrie, the broadcaster found that producer “Oisin Tymon was subject to an unprovoked physical and verbal attack by Jeremy Clarkson. During the physical attack Oisin Tymon was struck, resulting in swelling and bleeding to his lip. The verbal abuse was sustained over a longer period, both at the time of the physical attack and subsequently.” The report also stressed that Tymon “offered no retaliation” and was the victim “through no fault of his own.”

The BBC’s director general Tony Hall announced on Wednesday that Clarkson’s contract would not be renewed, “marking the end of his time as Top Gear presenter.” (Clarkson’s contract was due to end at the end of the month.) Hall also said that the organization had “not taken this decision lightly,” but “a line has been crossed” and he could not “condone what has happened on this occasion.”

As rumors of Clarkson’s firing began to swirl, so did rumors of his possible replacement though no one has officially been announced. It’s also unclear what will happen to Clarkson’s co-hosts Richard Hammond and James May, whose contracts were also up at the end of March, though Hall did indicate that the BBC would be attempting to renew Top Gear for the 2016 season.

This isn’t the first time that Clarkson has found himself at the center of a controversy and in 2014 the BBC gave the presenter a final warning after unused Top Gear footage, found by the Daily Mirror, appeared to show Clarkson use the N-word.

Read More: Six Times The BBC Should Have Suspended Jeremy Clarkson But Didn’t

Yet Clarkson has plenty of people in his corner. The series has a huge following, largely thanks to Clarkson’s often offensive humor and disdain for political correctness. Shortly after he was suspended, an online petition clamoring for Clarkson’s return to Top Gear cropped up and has more than a million signatures.

Even political leaders spoke out in his defense: the U.K.’s prime minister, David Cameron, told the BBC in an on-air interview that Clarkson was a friend and “because he is such a talent and he amuses and entertains so many people, including my children, who’d be heartbroken if Top Gear was taken off air, I hope this can be sorted out, because it’s a great programme and he’s a great talent.” He later told an interviewer that his daughter had even threatened to go on a hunger strike if Clarkson wasn’t reinstated.

In his remarks on Wednesday, Hall also noted Clarkson’s popularity, adding, “Jeremy is a huge talent. He may be leaving the BBC but I am sure he will continue to entertain, challenge and amuse audiences for many years to come.” 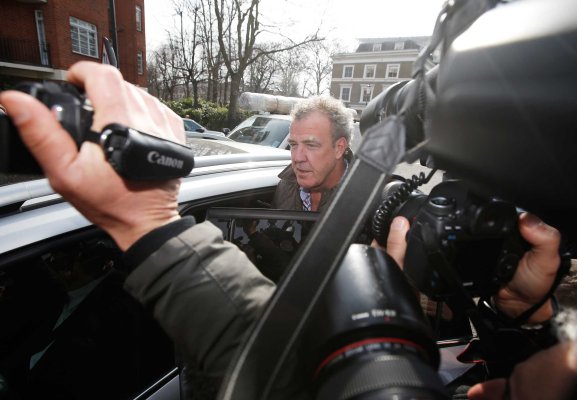 Here's 6 Times the BBC Should Have Suspended Jeremy Clarkson but Didn't
Next Up: Editor's Pick