In an opening video introducing The Late Late Show‘s new, very English host to Americans, James Corden learns everything that he knows about late-night hosting from Jay Leno. It’s a joke, of course, and a funny first calling card. But this very early glimpse of Corden’s new show suggests that he and his producers–and maybe late night generally–are increasingly learning from Jimmy Fallon.

This isn’t to say that Corden is himself influenced by Fallon, or that his late-night style–which, who knows what that is after one episode?–will especially resemble the Tonight host’s. (Certainly he does also have an earnest, let’s-all-have-good-fun-together vibe.)

But Corden’s hiring suggests a different direction in late night, from comedians to comic performers. Leno and David Letterman were standups; Conan O’Brien and Seth Meyers were comedy writers. But Fallon, and it seems Corden, represent a slight but significant shift: from hosts who say funny things to host who do funny things. (Letterman’s successor, Stephen Colbert, arguably has a foot in both camps, which will make it interesting to see the kind of show he builds around himself.)

It’s a broad generalization, obviously; Fallon is funny in his own right, and Corden co-wrote the British sitcom Gavin and Stacey, which he also starred in. But Fallon is a performer first, and his most memorable, viral moments–“History of Rap,” his musical imitations, his celebrity stunts and contests–have showcased his performance skills. The jokes, monologue and interviews–the talk-show part of the talk show–have been secondary. In the process, he’s made neither a talk show like Leno’s or a snarky comedy laboratory like Letterman’s, but something like a revival of the variety show.

There’s definitely something Fallonized about the new Late Late Show, not necessarily in a bad way at all. To replace the dryly funny Craig Ferguson, CBS also hired a performer: a game, eager multihyphenate who can act, sing and do physical comedy. And Corden’s first hour, if not a copy of Fallon’s show, clearly looks to use his talents in the way that Fallon’s Tonight used his.

So we got that well-produced, celeb-heavy video, which did double duty both introducing Corden and showing the comic acting range that apparently interested CBS in the host, who’s so far little known in the States. It was well-written, made an asset of Corden’s Englishness (“Petrol is a liquid. It can never be gas!”) and, intentionally or not, hung a comic light on the fact that one more white guy was getting a late-night show. (When the Late Late Show succession is decided Willy Wonka style, Corden literally picks up a golden ticket dropped by Chelsea Handler.)

But the standout bit in the first hour–and the one that most shows the Fallonization of late night–paired Corden with guest Tom Hanks to run through a frenetic medley of scenes from Hanks’ movies, complete with quick costume and wig changes and creative use of green screen. Like a lot of late night in general, it was aimed at viral sharing the next morning. And it was smartly chosen to highlight Corden’s strengths as a versatile stage performer the same way Fallon’s musical sketches do. I don’t know if this will be Corden’s “History of Rap,” but that’s clearly where this was going, and I bet we’ll be seeing more like it in one form or another.

I don’t want to dwell much on the talk-show part of this talk show, since that’s the most subject to tinkering and overhaul (not to mention the greater learning curve) on any new late-night series. There were first-night nerves, which Corden showed by giggling loudly at a lot of his own lines. The device of bringing both Hanks and Mila Kunis on at once cocktail-party style is promising, but we’ll see if it works with a wider range of guests. (The first guests were prepared to make a splash, including Kunis flashing a ring to “reveal” that she may or may not have married Ashton Kutcher.)

Other elements of the show are embryonic. Musician-comedian Reggie Watts was an inspired choice for bandleader, and let’s hope the show gives him an active role; it’ll be interesting to see if his experimental comedy style can mesh with Corden’s. As for rolling out Corden’s desk chair: I’m all for having a more intimate talk, but if Corden wants to go in that direction, his producers might just want to spring for a second, more comfy chair?

Corden will probably have plenty of time to prepare; CBS has been patient with this time slot, and it can’t have instant ratings expectations considering he’ll host all summer, between Letterman and Stephen Colbert, without much of a lead-in. The first night, then, is just a declaration of principles, and Corden’s was: I’m a nice guy who likes to entertain, and I’m excited to show you a good time.

He closed his first episode, in fact, with a serenade, seated behind a piano. It was funny enough, but also a little sincere and even sentimental, inviting viewers to stick with “The Late Late Show With Me–and You.” At one point, Corden playfully raised his hands to show us that he wasn’t really playing the piano. But there was no ironic, Dave-or-Conan-style archness here in deconstructing the artifice of the moment. Corden just seemed to be telling us: this is what it means to put on a show. 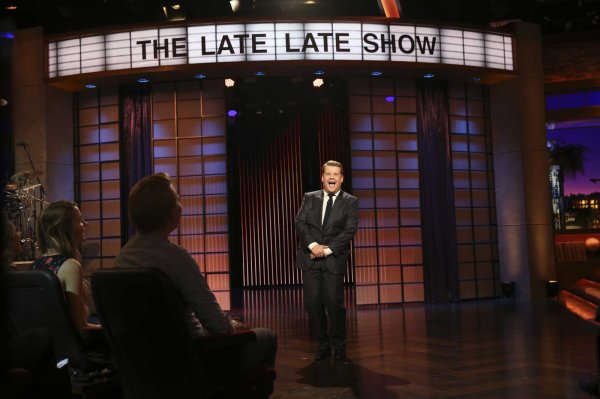 Critics and Jay Leno Agree: James Corden is 'Likeable' on The Late Late Show
Next Up: Editor's Pick