As opponents of LGBT rights in Indiana and elsewhere advance a backlash against marriage equality, promoting “religious freedom” bills and other legislation targeting gays across several states in recent months, it’s becoming clear that the struggle for full equality will continue for a long time to come. This reality defies what some in the media, and even many gay activists themselves, have portrayed as a state of near total victory as they anticipate a U.S. Supreme Court ruling striking down same-sex marriage bans in all 50 states come the end of June.

Evidence of how deeply entrenched homophobia remains can be found in the research of Google data scientist Seth Stephens-Davidowitz. Using a variety of data sets — Gallup surveys, U.S. census data, Facebook profiles, Craigslist ads, Google searches, and dating and relationship sites such as Match.com — Stephens-Davidowitz determined that the closet in America among gay men is still much bigger than many might imagine. Men in many parts of the country, it seems from this data, are still afraid to come out. And the climate of homophobia that keeps these people in the closet is causing a great deal of pain and suffering. As a heterosexual man who attended Harvard, lived in liberal enclaves all his life, and supported gay rights, Stephens-Davidowitz told me he believed we’d come much further than we actually had. Instead, his research showed just how far LGBT people are from true victory.

After determining that the percentage of men attracted primarily to men is roughly equivalent in states throughout the country, based on dating site and adult-content searches, Stephens-Davidowitz was able to draw some preliminary conclusions. The barriers preventing men from building openly gay lives in certain parts of the country are clearly specific to the local social climate. For instance: The rate of Craigslist searches by men seeking casual encounters with men is higher in Mississippi than in New York, while there’s a higher rate of gay men seeking dates and relationships on Match.com in New York than in Mississippi.

“The closet doesn’t just mean you don’t announce your sexuality on Facebook,” Stephens-Davidowitz said. “It’s influencing people’s lives in a big way.” For a closeted gay or bisexual man in Mississippi or someplace like it, in other words, a relationship with a man may seem impossible. Some men in this situation are married to women or are trying to pass as heterosexual while seeking secretive, casual encounters on the side.

Regardless of geography, of course, not everyone is looking for a relationship. Many people who are openly gay, lesbian, or bisexual, too, enjoy being single or constructing various kinds of relationships. But Stephens-Davidowitz points to one horribly confining and terribly sad effect of homophobia in conservative parts of the country and even in conservative areas of more liberal regions: It allows gay and bisexual men in these regions to seek only furtive, often dangerous sexual encounters with other men rather than making free choices about their sexual and emotional interactions and enjoying the rites of passage of dating and relationships just as heterosexuals do.

Stephens-Davidowitz noted that a woman’s asking Google this question doesn’t mean her husband is necessarily gay or bisexual. Again, it’s the consistent patterns among various data sets that permit him to offer the conclusions. The fact that he saw more men searching for casual encounters with men in these places, fewer men looking for long-term relationships with men, and more women searching for answers about whether their husbands are gay added up to something. Stephens-Davidowitz determined that, on Facebook (which is, of course, not anonymous, and where users can identify their sexual orientation), about half of gay men nationally do not identify publicly as gay or bisexual. In more conservative places, again using Mississippi as an example, that figure goes up to 80%.

The fascinating demographics of gay men in Stephens-Davidowitz’s research point to a broader fact: Far fewer people are openly gay (or, we can assume, openly lesbian or bisexual) than we have come to think, even in perhaps the most liberal places, and it’s extremely difficult to be out in many parts of the country. The presumption of victory whitewashes the hardship of millions of Americans — not just lesbians and gays themselves but also the spouses and children of people living in the closet.

Some of these phenomena may be partly generational. “In Gallup polls, among people under the age of 30, more than 6 percent of adults tell pollsters they’re gay,” Williams Institute Demographer Gary Gates told the Chicago Sun-Times in 2013, discussing Stephens-Davidowitz’s findings. That’s double the rate for adults over 30. “Is that really because young people are gayer?” Gates asked. “I think a large piece of that is younger people are growing up in an environment where this is acceptable, so they’re willing to identify themselves as gay.”

That is a measure of some progress, likely in some places while not in others. But it’s far from near victory. 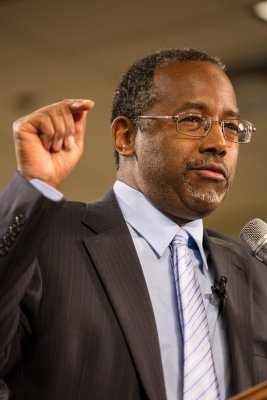 No Ben Carson, Homosexuality Is Not a Choice
Next Up: Editor's Pick