This 50-Year-Old Prediction About Computers Will Make You Sad

Fifty years ago, when TIME made computers the cover subject for the April 2, 1965, issue, it seemed like the technology had already grown beyond the bounds of human imagination.

A little more than a decade earlier, the magazine reported, the United States had been home to a mere 100 computers. By 1965, there were 22,500 of them. (A 2013 Census report found that 83.8% of households had a computer in the U.S., and that’s not even counting businesses or government offices.) The smallest model available weighed a now-whopping 59 lbs. The government was spending a billion dollars a year on its computers — that’s about $7.4 billion today — and 650,000 Americans were employed making or selling computers, as others in many industries lost their jobs to automation.

They had irreversibly changed the speed of life across the country, making the impossible possible. By TIME’s calculations, “To process without computers the flood of checks that will be circulating in the U.S. by 1970, banks would have to hire all the American women between 21 and 45.”

And, some experts told TIME, those changes would only continue:

Though the economy would have to adjust, it wouldn’t be all bad. “Many scientists hope that in time the computer will allow man to return to the Hellenic concept of leisure, in which the Greeks had time to cultivate their minds and improve their environment while slaves did all the labor,” the article continued. “The slaves, in modern Hellenism, would be the computers.”

The full century during which this change was predicted is only half-way done, but at this point the chances that we’ll live to see a life of Hellenic leisure seem pretty dim. In fact, as a whole, Americans are working more than we were before computers came along to help out. (That change takes into account the entry into the workforce of many women; among men only, the average hours worked per week is slightly down, but not by as much as was predicted in 1965.)

Points for accuracy should go to the 1965 story’s dissenters, who argued even then that society has always adjusted to whatever changes technology may bring, eventually creating more work for people to do when the old jobs get displaced. Sorry, 1965 readers who were looking forward to a life of computers doing all the annoying or difficult stuff.

And, even though computers aren’t doing all the work, some of the 1965 story’s predictions did come true. For example, Computers, TIME accurately predicted, “will eventually become as close to everyday life as the telephone—a sort of public utility of information.”

Read the full 1965 cover story, here in the TIME Vault: The Cybernated Generation

Correction: The original version of this story misstated the proportion of U.S. households that had a computer in 2013. It was 83.8%. 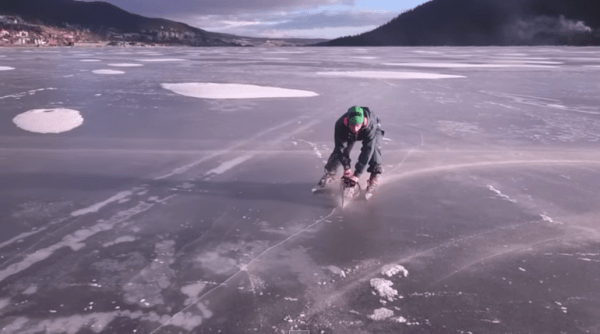 Watch This Guy Use a Chainsaw to Go Ice Skating
Next Up: Editor's Pick