I Eat Garbage to Save Money and Help Reduce Food Waste

There are few things in the world that I love as much as good bread. Toasted and spread with golden butter and sweet raspberry jam, sliced and piled high with tangy tomatoes, savory cheese, and crunchy pickles, it’s pretty much the perfect food.

Good bread is, however, expensive. The kind of artisanal bread I favor, made lovingly by hand and devoid of the myriad dough conditioners and preservatives found in most commercial loaves, is considered unsellable after a single day on the shelf.

I first became aware of the staggering amount of bread that ends its life in a dumpster from a college roommate. He drove a delivery route for a local bakery, getting up at 3 a.m. to load a van full of freshly baked bread and deliver it to various grocery stores around town.

Sometimes I rode along, braving the obscenely early wake-up just to spend time in his presence (I was hopelessly in love with him, despite his proclivity for wearing a blanket in lieu of pants).

At each store, he would exchange fresh bread for day-old, filling several black garbage bags in the course of a single shift. As a result, our household of broke college kids always had plenty of delicious bread to eat.

Despite our best efforts, though, there was simply too much for us: lots of it ended up in a dumpster anyway. Seven years later, the same dumpster continues to yield its starchy fruit: I am never without good bread.

Although bread is one of the easiest, most reliable items for which to dumpster dive — it’s thrown away all the time, it’s dry, non-perishable, and relatively non-pathogenic — I also scavenge produce, chocolate, and flowers from the garbage.

Sometimes it can be pretty icky; various slimes attend the decay of vegetables and fruit, and dumpsters are occasionally coated in unidentifiable goo. But for every mold-dappled orange and liquefying cucumber, I’ve encountered pristine clusters of grapes, whole heads of cabbage, onions and potatoes and bunches of celery discarded for minor cosmetic imperfections.

According to the Natural Resources Defense Council, $165 billion worth of food is thrown away every year in the United States, representing a staggering 40% percent of food produced. At the same time, an estimated 1 in 9 people worldwide lack steady access to food — including about 14% of Americans. These numbers are absolutely mind-blowing, but they’re just the tip of the iceberg: This Washington Post article presents a good summary of the chilling statistics.

Although I’m not by any means rich (after earning an expensive college degree, I am, like many of my generation, right back to where I started: in the service industry), I’m not so poor than I can’t afford decent food. Eating well is a top priority for me; I forgo cable TV, a nice laptop, professional haircuts, and many other luxuries in favor of organic milk, pastured eggs, and organic produce.

But, still, eating well is not cheap. I couldn’t afford as much of the fancy bread and chocolate I love so much if I bought it at the store; dumpster diving lets me enjoy high-quality food while diverting a tiny bit of our nation’s insane food waste to my table.

But, you might protest, (as have many of my more squeamish friends), you’re eating out of the garbage. Gross! It’s true. Dumpsters are not particularly sanitary places. Although many bakery dumpsters, for instance, are just used for bread, and thus aren’t likely to contain contaminants like raw meat or chemicals, others can get pretty shady.

That’s why I usually stick to fruits with thick skins — oranges, melons, mangoes — or vegetables that I plan to cook, and wash everything thoroughly before I prepare it. Grocery stores without trash compactors (they’re pretty rare these days) can be a great source of packaged food that’s just a day or past the expiration date.

Besides the “ick” factor, dumpster diving does take a lot more work than simply going to the store and laying your money down. But, for me, the cost-savings, combined with the satisfaction that comes from playing a small part in reducing food waste, is totally worth it.

Emily A. Klein wrote this article for xoJane. 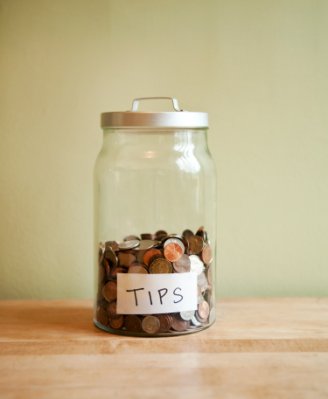 I Don't Feel Guilty for Not Tipping My Waitstaff
Next Up: Editor's Pick