Starting Wednesday, many of Seattle’s workers will enjoy a higher minimum wage – but some businesses have tried (unsuccessfully, thus far) to keep their employees out of that group. Claiming that Seattle’s wage law unfairly defines franchise owners as large employers, a lawsuit – led by the International Franchise Association (IFA) and franchisees from the hospitality, healthcare and marketing sectors – sought to stop, or at least slow, the change.

The plaintiffs’ objection: by being defined as large employers, franchises will be required to raise employees’ wages more quickly than if they had been categorized as small businesses. The latter designation, they say, is more appropriate, given the scant numbers employed by most individual franchises, as opposed to the far larger numbers employed by their parent corporations. Though a district judge ruled against the plaintiffs in March, the IFA has vowed to continue its fight.

A number of media outlets were quick to tar this lawsuit as mere money-grubbing by ‘Big Fast Food.’ And so it might be. The IFA, for instance, has been accused of defending franchisors’ interests at the expense of its franchisee members.

An unlikely comparison from American history, however, suggests a more sympathetic reading of the franchisees’ predicament – if not their representatives’ recent lawsuit. The subject of this comparison? Nineteenth-century America’s army of traveling peddlers: men (and occasionally women) who sat at the vanguard of America’s consumer-goods revolution. One part entrepreneur, one part working-poor, peddlers mediated between urban merchants and rural consumers at a time when the former were typically too risk averse to develop their own marketing and sales operations.

Comparing franchise owners and peddlers may, at first, seem an unlikely analogy (journalist Timothy Noah, writing for Pacific Standard, has suggested sharecroppers as a closer equivalent). But, on closer inspection, the two turn out to have much in common.

First, both groups mainly exist to insulate higher-ups from risk. For example, should an individual franchise location fail, corporate HQ may lose its cut of the franchise’s revenues, but it doesn’t have to answer for the cost of the franchise itself. That’s on the owner and her creditors. The same was true for peddlers, who paid for their wares before they left for the countryside. If demand proved weak, it was the peddlers’ problem, not their suppliers’.

Second, both franchise owners and peddlers were often lured into their trades with outsized promises of wealth. Franchising corporations – in fast food and beyond – are notoriously cagey about the profits franchisees can expect to reap. While sales literature is quick to publicize million-dollar revenues, it’s far more circumspect about owners’ average income. The statistics suggest why. Even at top-grossing franchises, many owners default on their loans. And even those who stay afloat take home an average income of only $50,000. This, of course, is nothing to sneeze at – especially in comparison with fast-food workers’ salaries. But it hardly puts owners in the top 1% of wealth holders.

Peddlers’ prospects were equally disappointing. While a handful went on to commercial fortunes, the majority languished just beyond the grasp of poverty. A rain-soaked and wind-beaten existence, peddling was a young man’s game – far richer in reputation than in reality. Many entered the profession in search of a promised career as a merchant, but instead found sore backs and tired limbs.

Third and finally, franchise owners and peddlers have served as lightning rods for economic anxieties not of their own making. Consider how the Seattle franchise owners’ suit has been seen as a machination by McDonald’s corporate HQ. Never mind that franchise owners typically have minimal control over wage levels, let alone marketing strategy or product design. This still hasn’t spared them from blame for the sins of their bosses.

Peddlers faced similar problems. Though merely pawns in the larger economic transformation sweeping nineteenth-century America, peddlers were often blamed for its most disruptive effects. Stuck with a broken clock or a wooden nutmeg (carved knock-offs that peddlers were reputed to sell in place of the genuine article), poor consumers were quick to vilify salesmen rather than their unscrupulous suppliers. As such, peddlers earned a reputation as tricksters and cheats, while the suppliers responsible for these frauds continued to masquerade in the garb of respectability.

In 1837, for instance, Ohio peddler John Bartholomew wrote to tell his supplier that the clocks he had received contained “very rusty” wires and parts “Swelled So that they will no [sic] run until I whittle & Smooth the wheels.” And yet, it was peddlers themselves who were cursed, in the words of one customer, as “dam profiteers” and even threatened with violence (the same irate customer pronounced that peddlers, according to New England peddler James Guild, “ought to have a good whipping by every one that sees you”).

This is not to suggest that peddlers were the worst victims in these transactions. That distinction goes to hardscrabble farmers who sold their tiny surplus for a few small luxuries – only to discover these products were not what they seemed. So, too, in Seattle’s minimum wage fight, franchisees face brighter prospects than uninsured fry cooks who daily risk third-degree oil burns for less than a living wage.

But that doesn’t mean that franchise owners’ claims warrant no consideration. By being included under the Seattle labor law’s definition of a large employer, franchisees are on the hook for an $11 minimum wage starting April 1, as opposed to the $10 they would owe if counted as small businesses. This may not sound like much of a difference, but for franchises with 20 half-time workers, it means around $20,000 in increased annual labor costs. That’s hardly a deal-breaker for a major corporation or even for the handful of owners with dozens of locations in their portfolio – but it’s a serious pinch for small franchisees averaging $50,000 in take-home income and more than a half-million dollars in debt.

A real solution to America’s wage problem therefore needs to take account of franchisees’ grievances. Just as consumers’ complaints against peddlers were inseparable from peddlers’ exploitation by their suppliers, justice for franchise staff demands justice for franchise owners. This, of course, is no easy task – but should minimum wage increases proceed without reference to franchisees’ concerns, they’ll merely succeed in gutting the middle, rather than redressing America’s larger edifice of inequality.

Sean Trainor is a Ph.D. Candidate in History & Women’s Studies at Penn State University. He blogs at seantrainor.org. 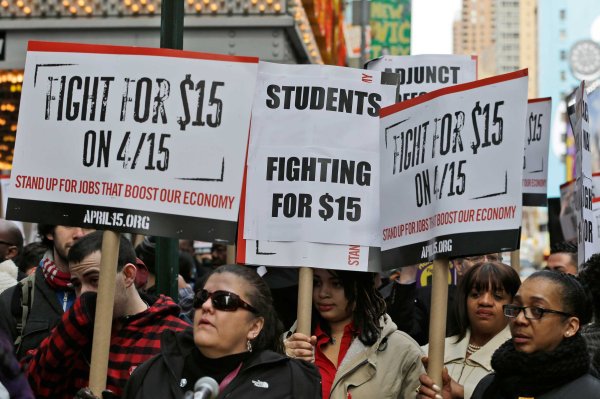