A live broadcast by Singaporean Prime Minister Lee Hsien Loong on the death of his father is watched in a reception area at a hospital where the city-state's first Prime Minister Lee Kuan Yew passed away on March 23, 2015, in Singapore
Joseph Nair — AP
By David Stout

Messages of condolence flooded in from the East and the West on Monday as the world paid tribute to Singapore’s founding father and first Prime Minister Lee Kuan Yew, following the former strongman’s death at the age of 91.

Lee died in the early hours of Monday morning local time at Singapore General Hospital, after being treated for severe pneumonia and then an infection since his initial admission over a month ago.

The former head of government has been largely credited with fostering the environment that allowed the former British colony to transform into a flourishing bastion of international business and innovation.

“The first of our founding fathers is no more. He inspired us, gave us courage, kept us together, and brought us here. He fought for our independence, built a nation where there was none, and made us proud to be Singaporeans,” said Lee’s son and serving Prime Minister Lee Hsien Loong during a televised address. “We won’t see another man like him.”

Flags were at half-mast across the city-state as Lee’s compatriots began observing a week of official mourning. A state funeral has been scheduled for March 29.

During his time as head of government, Lee was also viewed as an adroit statesman who helped foster ties and understanding between Western powers and rising nation-states across Asia.

“Minister Mentor Lee’s views and insights on Asian dynamics and economic management were respected by many around the world, and no small number of this and past generations of world leaders have sought his advice on governance and development,” said U.S. President Barack Obama in a statement.

Former President George H.W. Bush echoed these sentiments. “I will always be proud that Lee Kuan Yew was my friend,” he said. “I respected his effective leadership of his wonderful, resilient and innovative country in ways that lifted living standards without indulging a culture of corruption. I was also proud of the progress Singapore and the United States achieved together as partners. Because of the example set by Lee Kuan Yew’s singular leadership, let me add I am confident that the future will be bright for Singapore.”

Chinese Foreign Minister spokesperson Hong Lei described Lee as the bedrock of the Sino-Singaporean relationship and a visionary on the continent.

India’s Prime Minister Narendra Modi said Lee was both a “far-sighted statesman” and “a lion among leaders.”

President Joko Widodo of Indonesia called Lee “a close friend of Indonesia and renowned as the founding father of modern Singapore.”

“As a great leader and a statesman who truly loved his people, he was also known as an influential political figure in Asia,” he added. “Under his leadership, Singapore has succeeded in transforming itself into a major economic hub for the Asian region and stands in equal footing to other developed nations of the world.”

Amid the tributes, advocacy groups also cautioned against ignoring the strongman’s authoritarianism and checkered record on human rights in the wake of his death.

“Singapore still is, for all intents and purposes, a one-party state where political opponents are targeted and contrary views muzzled — and that too is a part of Lee Kuan Yew’s legacy that many of the new generation of Singaporeans are none too happy about,” said Phil Robertson, deputy Asia director of Human Rights Watch.

In his homeland, though, the overriding feeling was one of mourning a beloved patriarch. 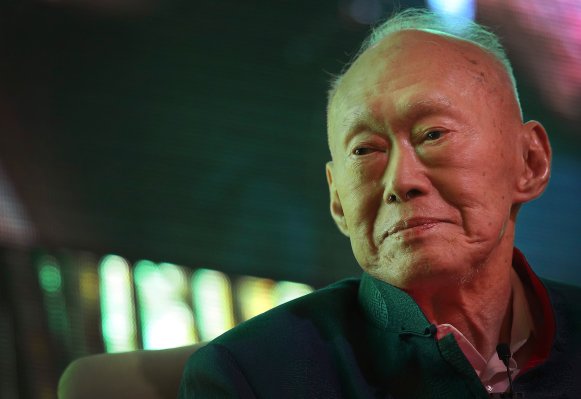 'Father of Singapore' Lee Kuan Yew Dies at 91
Next Up: Editor's Pick