How Ted Cruz Plans to Disrupt the GOP Presidential Primary

U.S. Sen. Ted Cruz (R-TX) stands on stage while speaking to a crowd gathered to announce his presidential candidacy at Liberty University in Lynchburg, Va. on March 23, 2015.
Andrew Harnik—AP
By Alex Altman

Ted Cruz’s decision to launch his presidential campaign on Monday breaks all the customs of a typical candidate announcement.

Presidential hopefuls tend to kick off the quest for the White House on home turf, after forming an exploratory committee and at the beginning of a new fundraising period, which allows them to maximize the amount of time they can spend raising money before filing their first report. In contrast, the Texas Senator will declare his intentions during a convocation speech at Liberty University in Virginia, forgoing an exploratory committee to formally jump into the race in the final weeks of the first quarter.

Cruz’s move, confirmed in a Twitter message just after midnight Monday ahead of a speech later in the day, may be unconventional. But since arriving in the Senate in 2013, the firebrand Texan has bet that the new way to win in politics is to break the old rules. A freshman Senator is supposed to focus on committee work, forge alliances, sidestep the spotlight. Instead, Cruz led the charge to shut down the government, alienated his Republican colleagues and reveled in the controversy, which vaulted him to conservative superstardom.

This is the context you need to understand how Cruz, the first major GOP candidate to formally launch a bid for the White House, plans to run his presidential campaign. “What I’m trying to do, more than anything else,” he explained last month at the Conservative Political Action Conference outside Washington, “is bring a disruptive app to politics.”

Like most of his unorthodox moves, the details of his announcement make some strategic sense. Cruz’s campaign will be based in his hometown of Houston, but it aspires to become national grassroots movement, with the Republican Party’s most conservative voters on its front lines. To win the nomination, Cruz will have to muster an army that combines the Tea Party faithful with the GOP’s social conservative wing and foreign-policy hawks.

That’s where the location of Monday’s announcement comes in. Liberty, a Lynchburg-based school founded by influential pastor Jerry Falwell, is a cradle of Christian conservatism; Cruz also chose it for a major speech last year about religious freedom. The venue is a clear signal that the Senator intends to court the GOP’s evangelical wing, which dominates the first-in-the-nation Iowa caucuses.

The timing of the rollout is also logical. As a federal officeholder, he is restricted from coordinating with his super PAC, which limits the benefits of delaying his announcement. Due to the advantages of launching in April—which puts off the requirement of reporting fundraising tallies until mid-July—the political calendar next month is expected to be crowded with campaign announcements from the likes of Rand Paul, Hillary Clinton and others. By jumping in now, Cruz is able to grab the spotlight without rivals around to share it.

He could use the boost. In the early phases of the GOP primary, Cruz has been less a leading man than an afterthought. An average of early Iowa polls shows Cruz running ninth, pulling about 4% of the vote. In the fight to win the hearts of Hawkeye State social conservatives, he faces competition from former caucus winners Mike Huckabee and Rick Santorum, as well as Wisconsin Gov. Scott Walker, the son of a Baptist preacher.

Indeed, many Republican strategists have dismissed Cruz as a serious contender for the nomination. They argue that his appeal is deep but narrow, confined to the far-right reaches of the party. He is estranged from the Washington establishment and the GOP donor class because of maneuvers such as the government shutdown. Even in Texas, he has to compete for money and influence with former governor Rick Perry’s likely presidential campaign and the deep-rooted Bush network. (Cruz’s advisers plan to raise $40 million to $50 million to compete in the primary, the Chronicle reports.)

The outside groups that helped marshal support for his Senate bid, such as the Club for Growth and Senate Conservatives Fund, are unlikely to play the same role in a nominating contest crowded with conservative stars. Like Paul and Rubio, he will have to overcome the challenge of running as a first-term Senator after the GOP has spent the past seven years dismissing Barack Obama as too callow for the job.

But Cruz has always worn the naysaying of Washington Republicans as a badge of honor. He has long believed that he can galvanize the GOP grassroots and run a guerrilla campaign funded by small-dollar checks. As a national strategy, it has precedent in Obama’s own 2008 primary campaign, which Cruz sought to replicate in his one successful political race. “There were two campaigns on which we modeled our campaign for Senate, and they were Obama’s campaign for President in 2008 and Marco Rubio’s campaign for Senate in 2010,” he told TIME in 2013. Cruz studied the Obama blueprint so closely that for Christmas one year, he gave staffers copies of The Audacity to Win, the manual written by Obama campaign manager David Plouffe.

Cruz has assets that could lift him in the primary, including a preacher father with evangelical ties, a day job that offers him a national pulpit and oratorical chops that made him a national debating champion at Princeton. He will run as the race’s one untainted conservative: even in Iowa, he has declined to participate in the quadrennial ethanol pander. “He has the broadest appeal of all the conservative candidates, appealing to Iowa’s evangelicals, tea partyers, and liberty faction without changing anything about who he is,” said Steve Deace, a conservative Iowa talk radio host. “He’s arguably the best soldier the conservative cause has had in recent memory.”

Running as a purist has limits, of course, and GOP critics are confident the presidential primary will expose the flaws in the strategy. Beginning Monday, Cruz will try to prove them wrong once more. 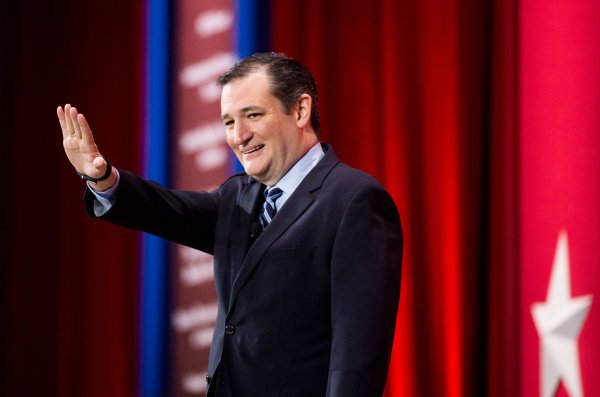 Cruz to Announce 2016 Bid
Next Up: Editor's Pick