Scandal showrunner Shonda Rhimes used last night’s episode of the hit political drama to take a stand on how the media scrutinizes women in Washington, just as Hillary Clinton prepares to announce her long-anticipated bid for the presidency in 2016.

Rhimes’ shows might be best known for their crazy plot twists, but another hallmark of her work is the powerful soliloquy, delivered quickly and emphatically. On last night’s episode of Scandal, White House Press Secretary Abby Whelan (Darby Stanchfield) contemplated resigning from her post when another woman, played by Lena Dunham, threatened to write a tell-all about the sex lives of several men in D.C., including Abby’s boyfriend, political consultant Leo Bergen (Paul Adelstein). When Leo tells Abby she doesn’t have to worry because he was the one who committed the “disgusting” sexual acts, she fires back that of course the scandal will hurt her too.

The fictional Press Secretary says the media has long had double standards for women in the Capitol: reporters write stories about how she looks and who she is dating just as much as they write about her accomplishments. Read a transcript of the monologue below: 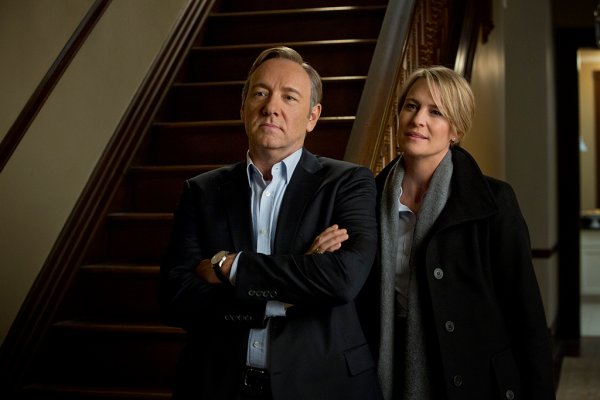 The Underwoods: A Less Perfect Union
Next Up: Editor's Pick