Why Female Extremists Perplex Us

Abu-Baker Al Baghdadi, head of ISIS, probably wouldn’t call himself a feminist. But unlike Al Qaeda or the Taliban – which actively excluded women from their operations – ISIS has recruited women, employing some of them in all-female security brigades. It has lured them with the promise of living a life of purpose and adventure, helping to build an Islamic utopia, and meeting a Muslim husband.

It has also enslaved and raped hundreds more women, often using race to decide who will be a fighter, and who will be a sex slave. Western women tend to dominate, while Arab women and Kurds comprise the underclass.

This is something that we haven’t really seen before: an entity that, in some ways, empowers women but, by most definitions, is decidedly not feminist. After all, while anything feminist may give women agency, anything that gives women agency isn’t necessarily feminist.

In a way, ISIS is “using feminism to cut feminism at its knees,” explained Mona Eltahawy, an Egyptian-American activist and journalist at a recent New America NYC event. Sure, women may exercise a certain amount of agency when they join ISIS. “But agency to do what?” Eltahawy asked. Women can be just as violent as men; they’ve cheered ISIS’ beheadings on social media sites. The question that’s been a lifetime concern for her: “What makes these women become the foot soldiers of patriarchy?”

There are no clear answers. But trying to make sense of violent extremism’s confusing relationship with women – and vice versa – was the frame that drove the evening’s conversation.

MORE Where are all the women peacekeepers?

Part of the reason that this relationship is so vexing is because it seems to reveal a paradox: a terrorist group that’s able to recruit women while spewing ideologies that are antithetical to women’s rights. ISIS recognizes women’s importance in building a powerful Islamic State (primarily as reproductive vessels and as guards who can ensure that enemies don’t exploit gender dynamics to pass through security checkpoints) even as it simultaneously subjugates them.

To understand this relationship better, do we need to relinquish our narrow definition of what “feminism” is and what it is not? Perhaps wrapping our mind around women and extremism necessitates a kind of re-engineering of our vocabulary around women’s empowerment, and this new gray area that groups like ISIS inhabit.

This is a big question that as yet, doesn’t have an answer. So Eltahawy and others started by discussing a few facets of this issue that we are beginning to explain and understand: why some women seem to be choosing to join the organization.

There are some “pull” factors involved in making that choice – in other words, aspects of life in the Islamic State that might entice women to join. Eltahawy joked about “ISIS eye candy” – images of attractive young men that the organization is using to lure European girls. “They’re like the pop stars of the armed extremists.”

And there are “push” factors, or realities of life at home that might make a woman want to leave. Åsne Seierstad, the author of One of Us: The Story of Anders Breivik and the Massacres in Norway, explained that some foreign women that join are radicalized as a result of feeling alienated in the West. One woman, she notes, turned to radical Islam after a religious issue prevented her from getting her high school degree. Prevented from living the life she desired in Norway, this woman sought to start a new one in a place where she was likely told she’d be accepted.

On the surface, these factors are logical, but they don’t explain the paradox of women joining a group with anti-women beliefs. This paradox prompted Lydia Polgreen, the deputy international editor at the New York Times and event moderator, to ask: is violent extremism inherently antifeminist and misogynistic?

The resounding answer from all of the event’s panelists: yes.

Seierstad offered up Norwegian extremist Anders Breivik as an example. Breivik has blamed Islamic extremism and the “Islamisization of Western Europe” on feminists. To him, Europe has been “feminized” over the past few decades – which, by his interpretation, means it has become too weak to stand up to violent Muslims. “He wants to restore a patriarchy to Europe where men rule and women are forced back into their reproductive roles, banned from higher education,” Seierstad explained.

And if we’re trying to make sense of the women-extremism relationship, the role of religion as a motivator of both women and violence is another critical layer to unpeel. Religious extremism follows the same misogynistic pattern, Eltahawy said, pointing to the impact that fundamentalist Christians have had on scaling back women’s reproductive rights in the United States.

“Is the prerequisite to the advancement of feminism a broader secularism?” Polgreen asked the panelists.

“Conservatism of any religion, [its] orthodox elements, are not conducive to feminism,” Eltahawy said, although she noted that there can be exceptions. Last year, she saw both secular and Islamist women in Tunisia working together to push for a clause in the new constitution – the first of its kind in the Arab world – that guarantees equality between men and women.

The beliefs of female Islamists span a wide spectrum. And in fact, female Islamic scholars are using their knowledge of religion to challenge the men who may attempt to use verses of the Quran as rationale to strip women of their rights.

But this activity may be less about religion, and more about men lashing out in response to global women’s empowerment and the changing gender dynamics – both at work and at home – that this movement has spurred. The goal of radical Islamist organizations appears to be to return the world to a time “when men had power over women in their lives,” said Alexis Okeowo, a contributing New Yorker writer. “You can see [this dynamic] even in developed countries where men still threatened by gains women are making.”

MORE Inside the fight to promote women peacekeepers in Afghanistan

In other words, this violence isn’t always tied to religion – but often to shifting cultural norms. “What’s happened in Egypt is that there’s a visceral realization among many men that women have broken down the door,” Eltahawy said. “They’re out there in the public space. [We’re in a] moment in history where men realize they’re being challenged in unprecedented ways.”

Women aren’t backing down anytime soon. So how do we counter the threat of the men who turn to extremism to turn back the clock on women’s rights? By rethinking the way that we punish those who have radicalized, and supporting women and civil society organizations who are on the frontlines of this fight.

Seierstad explained that some radicalized Norwegian citizens want to come home but are afraid that they’ll be incarcerated for rest of their life. “It’s very important to get them back and de-radicalize them” so that they can speak to young people who may be at risk for radicalizing, she said. “It’s not random who goes and who becomes radicalized. There are patterns, clear patterns, whether they are men or women.”

And it’s often women – mothers and wives – who can spot those patterns in their families. Women have long played crucial roles in peacekeeping and countering violent extremism around the world, something that Solveig Horne, Norway’s Minister of Children, Equality and Social Inclusion, emphasized. “If we want to effectively fight violent extremists, we should listen to the women on the ground and support their role,” she said. “They aren’t only victims of extremists – they are a force to be reckoned with in sometimes good and bad ways.”

Elizabeth Weingarten is the associate director of the Global Gender Parity Initiative, and associate editor at New America. This piece was originally published in New America’s digital magazine, The Weekly Wonk. Sign up to get it delivered to your inbox each Thursday here, and follow @New America on Twitter. 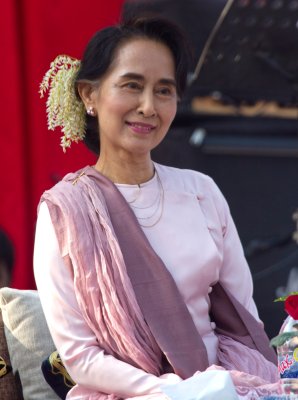 A Lesson From Asia’s Unsung Female Activists
Next Up: Editor's Pick