These 8 March Madness Apps Are a Slam Dunk

Tyler Ulis #3 of the Kentucky Wildcats goes to the basket as Rashad Madden #00 of the Arkansas Razorbacks defends during the championship game of the SEC basketball tournament at Bridgestone Arena on March 15, 2015 in Nashville, Tennessee.
Andy Lyons—Getty Images
By John Patrick Pullen

With the tip-off of the NCAA’s national men’s basketball championship tournament, all eyes and ears are pointed towards the hardwood Thursday, whether you’re perched in a corner office or cheering from some nosebleed seats. But wherever you watch the games from, your experience will no doubt be enhanced by a second screen where March Madness apps can do everything from keep track of your bracket to stream live video of the action.

Here are eight great March Madness apps worth loading into your tablet or smartphone:

If you’re a fan of the dark horse or the underdog, this is the app you’re rooting for this March. A breakaway hit among basketball fans, this app lets people create their own pools which can be shared with Facebook friends or even via text.

And while you might’ve missed out on most of this app’s magic after the initial tip-off, it’s also got an easy to read bracket that’s updated live (ideal for staying in the loop on hoops as the month goes on) and a fun, beat-the-clock game where you try to pick the winner of all of 2014’s tournament games. (It’s even hard to pick the winners after the game has ended.)

Bracket The Madness is available for free on the App Store and Google Play.

Whether you load this onto a tablet or a smartphone, this play-maker can do it all: scoring big with great, succinct analysis of the games (before and after tip-off), or passing you off to the NCAA March Madness Live app (see below) for live, in-game video. Though it overs all major sports, the app excels in its college basketball coverage, with links to breaking news, its blog, and expert picks.

CBS Sports is available for free on the App Store and Google Play.

Wherever life has brought you, it’s probably far from your alma mater. No bother — with Fanatic, you can find fan-friendly watering holes where you can enjoy a game in the company of people who bleed the same sports colors that you do.

Now, truth be told, this app isn’t as accurate as I’d like it to be. When using its location-based search to find a nearby bar for my team, it didn’t give top-billing the one I know to be the home court for my town’s displaced fans. So, if you’re hoping to find the best spot, I’d recommend pairing Fanatic with a Google search for maximum effect. But it’s good for every major sport, so don’t delete this app after they cut down the nets.

Fanatic is available for free on the App Store and Google Play.

If I were a betting man — and I am not — I’d put my money on this app when it comes to sizing up the individual March Madness match-ups. Sure, there may be more comprehensive odds-making apps out there, but for the casual fan (which includes most people who get swept up in basketball hysteria each March), Sports Betting provides clear information on the money line, point spread, and total points. And by simply tapping on the figures, the app shows you how much you’d win if you put down a bet — which you would do for entertainment purposes only, of course.

Sports Betting is available for free on the App Store and Google Play.

No matter what television station the game is on, it’s also available to watch live on the NCAA’s official app. Free to download, the app requires you to log in with your cable provider information to watch the games. (Don’t be fooled by the app’s free, temporary preview — you will have to log in.)

The best way to get the hardwood action at your office or even on-the-go, the app goes beyond the live game streams, offering a great array of behind-the-scenes videos and historical highlights. And setting it up with notifications is another great way to stay up to speed on the scores, right from the source, while doing other things (like your job).

NCAA March Madness Live is available for free on the App Store and Google Play.

Watching all sixty-seven games is a big commitment, but Thuuz helps make it more manageable by telling you when the action is heating up. Rating games on a scale of 0-100, it tells sports fans of all stripes whether a game is worth watching. But once the first whistle blows, the app adjusts those ratings in real-time, telling, for example, if a low-ranked underdog who was expected to be blown out is in the mix to pull off a fantastic upset. In addition, the app can track your favorite teams and even your fantasy football and baseball players, so you can turn on the TV when they’re having a game for the ages.

Thuuz is available for free on the App Store and Google Play.

Radio may be a shorter-wave technology, but TuneIn takes it worldwide with their streaming of local stations. By dumping a video stream for an audio play-by-play, the app will let you focus on the job at-hand, whether you’re a truck driver or a desk jockey. And TuneIn has a lot of live game broadcasts available — check out this link for what’s airing right now — which means even if you can’t watch the game, you don’t have to miss a minute of the action.

TuneIn Radio is available for free on the App Store and Google Play.

Okay, so the worldwide leader in sports may not be broadcasting the NCAA games, but you know they are drooling over the highlights, digesting the effects of the surprise outcomes, and breaking down all the daily news. To watch the network’s channels (which include everything from the flagship station to the ESPN SEC Network), you’ll need a cable company log-in. But once you get past that gatekeeper, the only thing keeping you from watching as many basketball highlights as you can handle is your bandwidth. (Speaking of that, you might want to only use this app on Wi-Fi, because it will crush your wireless data budget.)

WatchESPN is available for free on the App Store and Google Play. 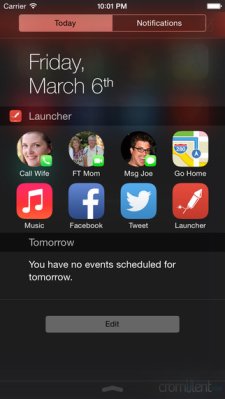 The Best App Apple Ever Banned Is Coming Back to iPhones
Next Up: Editor's Pick