Former Secretary of State Hillary Clinton speaks on stage during a ceremony to induct her into the Irish America Hall of Fame on March 16, 2015 in New York City.
Yana Paskova—Getty Images
By Sam Frizell

Hillary Clinton took respite from the swirling controversy over her email use as Secretary of State during an address at a summer camp conference on Thursday, where she criticized the bipartisan divide in Washington and touted her own ability to work across the party aisle.

“We’ve lost the essential role of relationship-building and consensus-building,” Clinton told the crowd gathered in an Atlantic City, New Jersey convention center. “When I was in the Senate, I realized that I might be opposed to someone’s bill today, and working with that person tomorrow.”

“I did a lot of reaching across the aisle working with people who had a lot of political differences with me,” she said.

Clinton recalled the days after 9/11 when as a Senator from New York, she lobbied President George W. Bush in the Oval Office for aid to New York. “President Bush looked at us and said, ‘What do you need?’ And I said, ‘We need $20 billion to rebuild New York Mr. President.’ And he said, ‘You got it.’ I will never forget that,” Clinton recalled.

“If you don’t build relationships with people and all you do is show up to argue and show up to point fingers, you can’t get anything done,” she continued.

Clinton’s remarks were not only a critique of the prevailing deadlock in Washington but also a dig at hardline Republicans and President Obama, who many critics have argued has been largely unable to rein in divides in the Capitol.

“The people who claim proudly never to compromise should not be in the Congress of the United States, because I don’t think I or anybody have all the answers. I think we can actually learn things from each other I think we have to start listening,” she said.

The candidates’ ability to ameliorate divides in Washington will likely be a key theme of the race, as hopefuls appeal to an American public weary of partisan gridlock in the Capitol. Clinton is set to announce her all-but-certain bid for president next month.

In her 30-minute speech and the subsequent question-and answer session, Clinton did not address the ongoing controversy over her use of personal email during her time as Secretary of State, when she sent work-related emails from her own account. Republicans have sharply criticized the likely candidate for taking over a year to turn over work-related emails, and for deleting over 30,000 emails she deemed personal. She has not spoken on the issue since a press conference at the United Nations last week.

Clinton spoke to a jam-packed crowd of hundreds of camp staff and professionals at the American Camp Association Tri-State CAMP Conference in Atlantic City. In an exhibition nearby, businesses displaying camp trophies, tubs of sunscreen, and lice treatments advertised to summer camp professionals.

Thursday’s event marked one of the last speeches on Clinton’s calendar, which for two years has been littered with lucrative speaking events across the United States. Earning fees that often ran upwards of $200,000, Clinton has addressed audiences ranging from Goldman Sachs to the National Association of Chain Drug Stores.

She also used her audience to return to more familiar themes of her career, like early childhood education and environmental protection. She has been a staunch advocate of pre-kindergarten programs, and she commended preschool initiatives in Oklahoma and New York City.

“We don’t have a national program but we’re doing it a local and state level,” said Clinton. “This is not just about how nice it is to do things for our kids, all of our kids, every kind of kid. This is about what we’re going to be able to do in terms of economic growth and jobs and opportunity into the future.”

In her remarks, Clinton told the crowd that she herself never went to sleep-away camp, but recalled her daughter Chelsea’s camp experience, who at age five said she wanted to go to summer camp. “I said, ‘You’re five years old!’” Clinton recalled to laughs from the audience.

Clinton, who became a grandmother in September, invoked her own motherhood several times. Her familial role is also likely to be a key facet of her presumptive presidential campaign. “Not just my granddaughter, who’s going to get all the time, attention, love nurturing that she can possibly absorb—I imagine when she finally starts to talk she’s going to say just leave me alone, enough,” Clinton joked to laughs. “But I want every child to have the same opportunity.”

A Reuters/Ipsos poll showed that among Democrats who are likely to vote in the primaries, support for Clinton dropped about 15 percentage points since mid-February to a low in the mid-50s. Nearly half of Democratic respondents—46%—said there should be an independent review of Clinton’s emails to ensure she turned over everything work-related.

Clinton is scheduled to speak on Monday at an event held at the Center for American Progress, a major liberal think tank in Washington D.C., and later that day at the Toner Prize celebration.

Clinton is not scheduled to speak publicly in April, when she is expected to announce her bid for president. 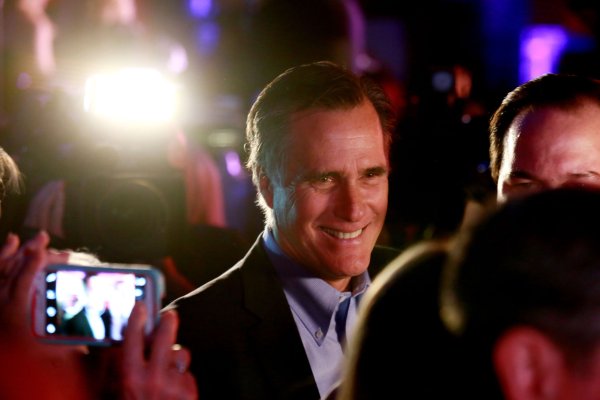