Does Nintendo Have Any Big Ideas Left?

In late 2013, Satoru Iwata sat alone on a bullet train headed toward Tokyo. As the carriage sped silently down the track, Iwata, the puckish CEO of Nintendo, began sketching out a new idea: a line of physical toys with built-in chips that connected wirelessly to the company’s varied game systems. The toys would let Nintendo trade on its universe of characters like Mario and Donkey Kong while generating new sales.

Iwata, a 55-year-old who dresses in three-piece suits and speaks in measured phrases, often pausing to chuckle, says he got more and more excited as he mulled the concept. He dashed off a four-page pitch to his engineers. “It was something I believed would be completely new for us,” he recalls. The result was an array of figurines dubbed Amiibo (Japanese wordplay meant to evoke friends playing together), which launched worldwide a little less than a year later and turned out to be a hit. Nintendo says it sold nearly 6 million figurines, which go for about $13 each, by the end of 2014.

Amiibo was a badly needed success for Nintendo–but one that underscores the difficult position the video-game pioneer finds itself in. The company that generated enormous profits in the 1990s and 2000s by introducing innovations in game controls and forcing rivals to adopt its ideas now at times follows in the footsteps of the competition. The gamemaker Activision has been selling similar toys since 2011, grossing nearly $3 billion. Disney, meanwhile, has its own version of the toys, based on movie characters such as Buzz Lightyear and Captain Jack Sparrow.

For all its iconic achievements, Nintendo has actually been struggling for years. Wii U, the successor to the wildly popular Wii, has sold just under 10 million units since its launch in 2012. (From 2006 to 2014, Nintendo sold more than 100 million Wiis. And Microsoft and Sony, which launched competing systems after Wii U, have both outsold it.) Last summer, Nintendo laid off over 300 employees in Europe. And the company’s return to modest profitability late last year, thanks in part to a weaker yen, materialized after three consecutive years of losses.

Nintendo’s critics have been relentless in demanding that the company abandon its hardware business and make versions of its games for smartphones and tablets. It’s not hard to see why: research firm Gartner reported global smartphone and tablet sales of over 1.4 billion units in 2014. By contrast, the two best-selling video-game systems of all time–Sony’s PlayStation 2 console and Nintendo’s DS handheld–each took nearly a decade to sell 150 million units. Meanwhile, smartphone gamemakers like King (Candy Crush) and Rovio (Angry Birds) are now worth billions. And mobile knockoffs of 1980s classics have turned into overnight hits (see: Crossy Road and Flappy Bird), while Mario, Luigi and friends can’t be found on a phone.

That Nintendo finds itself at this juncture shows how quickly things have gotten scrambled by new technology in the world of video games. Not long ago, choosing a game system was as simple as deciding between Sony, Microsoft and Nintendo–and parents with small children, along with casual older players, almost exclusively picked the latter. Now the same trends that are shaking up television and movies–from smartphones and tablets to cutting-edge virtual reality–are changing the equation for games too.

Nintendo’s senior leaders rarely talk publicly about internal strategy. But the company’s top three executives recently agreed to speak with TIME and insisted that Nintendo is not out of big ideas. The firm is busily retooling to create new products, like Amiibo and its new 3DS handheld, released in February, more quickly. And Nintendo is opening up by broadcasting presentations–sometimes serious, sometimes silly–directly to its fans to combat a reputation for flat-footedness.

Perhaps most telling is the fact that Iwata says Nintendo is exploring how to use phones and other devices to attract more players. “We’re constantly creating prototypes, many of which never see the light of day,” he says.

Not on the agenda: abandoning hardware. Nintendo argues that pressure to get out of that business reflects a deep misunderstanding of the company’s approach to innovation. “We view it as that marriage of the software with the hardware that together creates a compelling experience,” says Reggie Fils-Aimé, Nintendo of America’s president. Iwata concurs, explaining that dropping out of hardware would cripple the company. “If we don’t take an approach that looks holistically at the form a video-game platform should take in the future,” he says, “then we’re not able to sustain Nintendo 10 years down the road.”

Nintendo is a much older company than its signature candy-colored protagonists suggest. Founded in Kyoto in 1889 by artist turned entrepreneur Fusajiro Yamauchi, the company began as a manufacturer of handcrafted playing cards. The Nintendo most people know was born in 1966. That’s when Hiroshi Yamauchi, the firm’s longest-serving president (from 1950 to 2002), greenlighted a gadget that employed crisscross slats and a scissors-like handle to make an extensible arm. It sold millions of units and paved the way for a series of quirky playthings that included early electronic games in the 1970s.

More recently, the company has been run as a creative troika, with Iwata at the top and presidents in both Europe (Satoru Shibata) and North America (Fils-Aimé). Shigeru Miyamoto, the storied creator of Donkey Kong, Mario and Zelda, is the company’s creative genius and currently the general manager of its R&D division.

That division’s approach to game design can sound counterintuitive. Conventional wisdom holds that consumer-electronics manufacturers should first design a game system, then lure third-party software developers to furnish it with hits. Nintendo says it does the opposite: it experiments until it finds something its existing systems can’t do–motion sensors in the case of the Wii, or a touchscreen for the Wii U–then makes the hardware to support it. “Our job is to continue to create new platforms that enable us to create fun new ways to play,” says Miyamoto.

The company’s biggest seller remains its 3DS, a handheld successor to the Game Boy introduced in 2011. It is designed to appeal to all ages but is most popular among younger players. That’s partly about parents. In a world flush with smartdevices that can tap the entire Internet–including unsavory fare–Nintendo’s handhelds are relative walled gardens of controversy-free content. The 3DS can go online, but only if parents have set the device’s privacy controls to allow it.

Internet-connectivity aside, the 3DS is like an iPhone on steroids. It’s kitted with two screens, one of which is touch-sensitive; dual cameras for use by games or for taking pictures; and Wii-like motion sensors. It displays images that appear three-dimensional without having the player use special 3-D glasses. The latest version, the prosaically named New Nintendo 3DS ($199), takes the concept further by using advanced eye-tracking techniques to improve the 3-D effect.

The company says the newest model is one example of how Nintendo will conduct itself going forward. Late into the development of the system, Nintendo met with a company that had the technology capable of improving its 3-D, which in previous versions had been knocked for not always working well. After previewing the technology, Miyamoto stunned his engineers. “He said, ‘Why aren’t we putting that in this system? If we don’t put this in, there’s no point in making the system,'” recalls Iwata.

In times past, Nintendo might not have upended its plans at the final hour to make complex technical changes. “I was personally asked many times by many engineers internally, ‘Are we really going to do this?'” says Iwata, who began his career as a programmer. “This is where my background in technology is quite helpful, because it means the engineers can’t trick me.”

On balance, Nintendo’s methods have reaped more hits than misses. But the misses have been consistent and significant. Nintendo’s Virtual Boy, the company’s way-early shot at a virtual-reality gaming system in 1995, was a commercial disaster. The first “PlayStation” was supposed to be a Sony-manufactured add-on for Super Nintendo, but Sony and Nintendo couldn’t come to terms on a deal, spurring Sony to become a major competitor. And yet flights of fancy have ultimately proved to be Nintendo’s chief strength over the years. The Wii–with its motion-detecting controllers that had players swing invisible tennis rackets–seemed like a bizarre concept when it was unveiled in late 2006.

The comparatively weak response to the Wii U isn’t lost on Iwata. “Certainly I’m not satisfied with the current situation,” he says. “It may not be [people’s] first console of choice, but they recognize it as perhaps the best second console,” he adds. In truth, the Wii U may turn out to be a placeholder. “I think they’ve bought themselves time to figure out what that next monumental step forward is,” says Digital World Research analyst P.J. McNealy. Adds Yves Guillemot, CEO of games publisher Ubisoft: “The challenge for Nintendo now is to make sure their hardware continues to be convincing enough for people to buy.” Guillemot is confident the company can do that.

Dan Adelman, a Nintendo executive from 2005 to 2014 who is now a games-industry consultant, says the firm “is already making the best games of any publisher out there.” Compared with those of other publishers, Nintendo’s games consistently earn top marks from critics. But Adelman says the company must continue to aggressively streamline its bureaucracy.

That leaves Nintendo rethinking its approach to the very industry it helped define. “We do have doubts [about] continuing to extend our business in the way that we have in the past,” admits Iwata. “We have doubts about whether or not people will continue to see those simple extensions of what we’ve done as new and surprising.” Fixing that will require entirely fresh ideas that can cut through the noise created by so many competing platforms. “If it takes a lot of explanation for people to understand your entertainment product,” says Iwata, “you’re doing something wrong.” 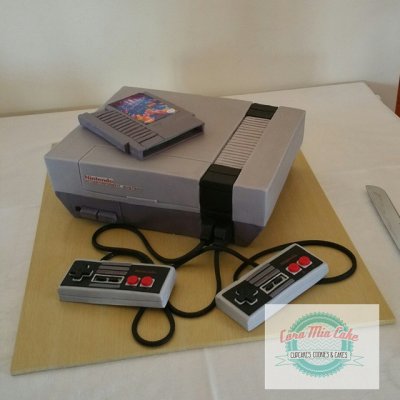 This Nintendo NES Has a Delicious Secret
Next Up: Editor's Pick