As if Californians needed another reminder that their state is dangerously hot and dry, they got it on March 15 when more than 30 runners at the Los Angeles marathon were hospitalized due to record high temperatures. The late winter heat wave — the mercury climbed above 90 in the city and surrounding areas — offered stark notice that, four years into a severe drought, the Golden State remains desperately parched with little relief in sight.

Gov. Jerry Brown and a bipartisan group of state lawmakers attempted to deliver some form of it Thursday when they announced a $1 billion plan to provide immediate relief and stave off future problems.

“This is a struggle,” Brown reportedly said during a press conference announcing the package. “Something we’re going to have to live with. For how long, we’re not sure.”

While the legislation includes millions of dollars in emergency aid, it also earmarks $660 million for flood prevention. Brown explained that flood control and drought relief were of a piece, according to the Los Angeles Times, describing them as “extreme weather events” related to climate change.

The new measures come two days after state officials voted March 17 to enact some of the broadest and strictest statewide water limits in California history. Outdoor lawn and landscape watering, which accounts for about half of all consumption in urban areas, will be limited to two days per week.

“It’s the number one thing that could be done and it’s easy,” says Jay Famiglietti, the senior water scientist at NASA’s Jet Propulsion Laboratory in Southern California.

The water board regulations will also ban residents from irrigating during rainstorms and for two days afterward. And restaurants will be permitted to offer tap water to patrons only upon request.

Given how little the new water regulations ask of residents, it’s easy to wonder why they weren’t enacted earlier. With surface water at dangerously low levels and non-renewable groundwater being depleted at a rapid pace, Famiglietti warned in a recent Los Angeles Times op-ed that the state must immediately ration water before California’s supply is gone completely.

“Because of the severity of the situation, I do think the public is ready for it,” Famiglietti says.

Several polls appear to back him up. An October 2014 survey found that Californians are just as worried about the drought as they are about the economy. Ninety-four percent of state residents polled in February said they consider the drought to be “serious.” Still, Californians seem unwilling to voluntarily curb their water consumption as much as officials would like. In January 2014, Brown urged Californians to reduce their water use by 20 percent. Statewide usage this past in January was just 9 percent less than the same month in 2013.

“Even though it was historically dry, it was still raining,” says Sarah Rose, CEO of the California League of Conservation Voters. “People see the rain and think they can go back to their old habits. We’re going to have to create new habits.”

While experts call the new water board rules a step in the right direction, they worry that more drastic, but necessary, measures like rationing and water price increases still haven’t been proposed.

“No one wants to be responsible for delivering the hard news that people have to significantly change their behavior,” says Charles Stringer, chair of the regional water board in Southern California. “We’re trying to get where we need to go without too much pain and sacrifice. But what the water experts and policy makers are saying with increasing urgency is that’s not possible.”

New regulations come with their own problems of how to enforce them. “There’s not going to be the manpower to do it,” says Famiglietti. A recent investigation by the Associated Press found that after California authorized emergency drought measures last summer to allow local communities to issue $500 fines for excessive water use, few residents actually got tickets.

In the meantime, officials are hoping public information campaigns might be more effective. One water district in Northern California has adopted “Brown is the New Green” as a new motto, encouraging residents to let their lawns die to conserve water. “People should feel really proud of having a brown lawn,” says Famiglietti. 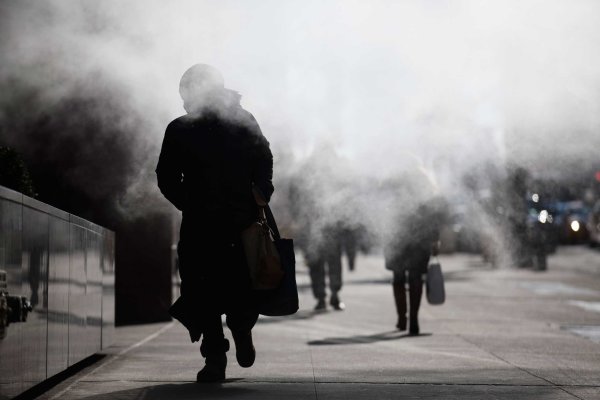 This Was the Warmest Winter on Record
Next Up: Editor's Pick