The 5 Best iPhone Apps of the Week

It seems like hundreds of new iPhone apps pop up every week, but which ones should you bother trying? We explored the App Store and found some apps actually worth downloading.

Tether works a lot like those keys that unlock your car when you’re nearby. Tether unlocks your Mac when you get close, then locks it back up the moment you step away. It’s a convenient way to avoid typing in passwords and getting right back down to business. It also feels like a program Bruce Wayne would have on his own computer, so there’s that, too.

Tether is free in the App Store

Enlight is a sophisticated digital photo editor. Not only does it offer basic color adjustment, light tinkering and Instagram-optimization, but Enlight also has some more involved, Photoshop-like features that can be used without much skill. You can toy with the sizes of images as well as shift the focus of the image itself. In short, Enlight helps you alter your photos for both style and quality.

I say a lot of things I wish I hadn’t, so an app like VaporChat is pretty essential for a walking foot-in-mouth marathon like me. VaporChat offers you far greater control over your conversations by allowing you to delete texts or even entire conversations from your own phone and from the receiving device as well. No further explanation is needed.

VaporChat is free in the App Store

A much-lauded maps app, HERE combines the practicality of Google Maps with the level of detailed offered by more powerful travel apps. This means maps can be downloaded for offline use or in areas of spotty wireless service—the times when having maps may matter the most. HERE functions as a full GPS, helps plan public transport routes, and can give to tips on where to stay or help keep your itinerary organized. The interface is simple, keeping the app from getting overwhelming.

HERE is free in the App Store

Though not a new app, the March Madness app’s new perfectly-timed update makes this one essential. And despite John Oliver’s well-reported piece on the ethics of the NCAA — especially during March Madness — your loyalty to your college team hasn’t gotten any less real. This app not only allows you to keep a bracket and keep track of the tournament’s progress, but it also gives you schedules and allows you to stream games live on your mobile device.

NCAA March Madness Live is free in the App Store 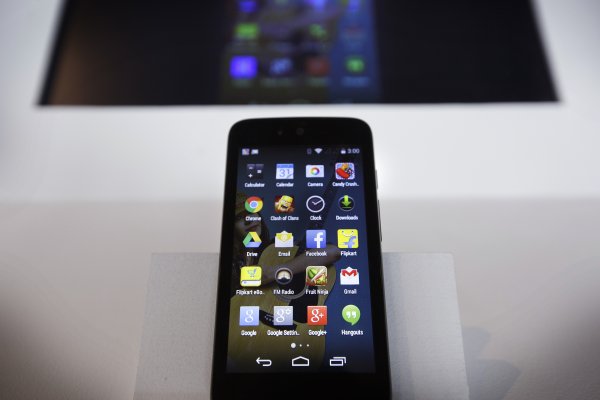 Actual Humans Will Now Approve or Reject Android Apps
Next Up: Editor's Pick