6 Reasons American Women Should Stop Trying to Be Parisian

In the vast and ever-changing world of What Is Stylish, there are a few things that seem to be constants: black always works; brows, lips, and lashes if nothing else; and when it comes to effortless chic and undone beauty, no one is more prized or emulated than the Parisian Woman. Here in the States, we’ve raised her to near-mythical status, a cloud of Guerlain and tousled bangs that floats past our un-chic lives, never exceeding a size 4. And, while I admit that I, too, love that image, and a copy of La Parisienne by Inès de la Fressange sits proudly on my desk, I can’t help but feel exhausted at the whole idea sometimes. As a French speaker of Quebecois extraction who lived several years in Paris — but who also has chronic rosacea, frizz-prone hair, and size-8 jeans — few things feel so close, and yet so far away.

No matter how much the dream of the Parisian Woman may frustrate me, though, I cannot deny her immense popularity. She’s her own genre of book, the subject of hundreds of popular blogs, and a mainstay of magazine articles. Even when we analyze her more critically, we can’t deny her influence. People want to talk about her, because on some level, we have come to believe that the Parisian Woman holds all secrets to living well, having great sex, and looking incredible even in a parka in the middle of winter. But, lusting after her imagined life is only, in the end, going to make us more unhappy with our own, and more unsure about ourselves than when we started — not to mention that the entire concept of a homogenous Parisian ideal doesn’t exist in the first place. Here, then, are six reasons why we should really stop putting so much effort into being so effortlessly Parisian, starting today.

1. It’s kind of sexist, when you think about it.
The whole “be more like this mythical French woman” trope is sort of an upscale version of those “How To Stay Sexy For Your Man” books. As far as I know, no one’s running around telling American men constantly that they need to look and act like Jean Dujardin in order to be appealing. No one is presenting French men as the one thing American guys should aspire to, thus implying — on some level — that they’re not good enough as they are. The entire idea is gendered in a way that puts yet another form of pressure on us to be something that we may not organically be, or may not even want to be, which is the last thing we need.

2. “Effortless” is all a façade.
In the Sexy Parisian Secrets world, “effortless sexy” implies: being thin; having clear, glowy skin; possessing undone hair that falls perfectly, and wearing expertly cut clothes that hang off you in just the right way (likely because you are so thin). Even if you were physically predisposed to these things, you’d have to put in some effort to pull them all off on a daily basis. And frankly, most of us are not. Me, for example — how exactly do I go about “dewy” and “no-makeup chic” when I am constantly battling adult acne and dry winter skin? I guess I just put a bag over my head and paste Louise Bourgoin’s face on it.

3. For as many women who actually fall into the stereotypes, there are many more who don’t.
Simply wearing makeup or having some color in her closet doesn’t mean a woman’s got nothing to teach us about her culture, that she is an outlier who has no place in the vox populi. It just means her style and success in the various domains of womanhood are more dependent on individual lifestyle choices than country of birth. And, the longer we focus on the idea of the waif-like Gauloise-smoking Parisienne who raises obedient-yet-clever children with ease, the less we understand — and respect — what it really means to be a woman.

MORE This Paris Wedding Is What Dreams Are Made Of

4. French women read the How To Be Parisian stuff, too.
The concept of being that perfectly chic girl is just as foreign to many Parisian women as it is to us. When La Parisienne hit shelves a few years ago, every girlfriend I had in Paris bought a copy and consumed it just as naively as their American counterparts, and the latest book on the subject has been selling just as well there. They, too, are eager for the secrets to mastering the messy bun and bold lip, because — get this — they aren’t born knowing.

5. Parisian women are equally obsessed with New Yorkers.
And, they’re constantly talking or reading about NYC (specifically Williamsburg, lately), and dropping English words into French sentences in humble-braggy ways. For a lot of chic young French women, being savvy in a distinctly New York way is incredibly desirable. So, the thirst for cultural copycatting goes both ways, and they are no more in possession of magical information about life than we are. They are looking right back at us for a lot of the answers.

6. Paris is a real city with real diversity.
It’s full of people who are not a singular white, thin woman in a messy topknot and Breton-striped shirt. And yet, this is rarely (if ever) included in the many odes to “French style.”How to be Parisian, for example, doesn’t mention the incredible array of hijab fashion you will see on the street every day in Paris. And, while it would be wrong to imply that France (and Paris in particular) is a bastion of diversity — or that French culture has mastered embracing different backgrounds — the reality is that these outdated notions of What Is Parisian only perpetuate the real problems of representation in the country itself.

As long as we want to imagine that France still looks like a Doisneau photograph, we ignore the very real people who make up the France of today. We don’t acknowledge the many women of color, or the women who can’t afford designer labels, or the women who don’t fit into a sample-size skinny jeans. Those women are French, too. They may not look or shop like Clémence Poésy, but that doesn’t mean we can’t learn something from them. Even if that something isn’t “use expensive face cream and have lots of sex,” which seems to be all we want to hear. 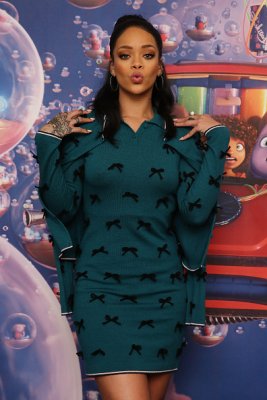 Rihanna Is the First Black Woman to be the Face of Christian Dior
Next Up: Editor's Pick