Donald Trump announced Wednesday he is forming a presidential exploratory committee for 2016, marking the fourth election cycle since 1999 that the eccentric real estate mogul has flirted with a White House bid.

“I have a great love for our country, but it is a country that is in serious trouble,” Trump said. “I am the only one who can make America truly great again!”

Trump said in a statement that he has made “several key hires” in early primary states including Iowa, New Hampshire and South Carolina, and has a staff of political advisers based in New York.

Michael Cohen, special counsel to Trump, declined to give further details about the businessman’s staff or his exploratory committee. “I can confirm that he remains serious about running for the office of the presidency,” said Cohen. “Specifics will be released by Mr. Trump in a short period of time.”

Trump has a long-standing habit of feigning at a run for the White House. In 2011, he delayed the renewal of his hit television show The Celebrity Apprentice and fanned speculation he was running for president, only to announce he was not running. Trump said in run-up to 2004 he was “very seriously” mulling a bid, and in 1999 he formed an exploratory committee and considered running that year as an Independent.

This year, Trump has said he’s “more serious than ever before” about running for president, a trope he also invoked in 2011. “A lot of people think I’m doing this for fun, they think it’s good for my brand,” Trump said last month at the Conservative Political Action Conference in Maryland. “I’m not doing this for fun. I’m doing this because we have to take our country back.”

The flashy and outspoken star of The Celebrity Apprentice would face significant challenges if he chooses to run for president. Nearly three-quarters of GOP primary voters said they couldn’t see themselves supporting Donald Trump in a presidential run, according to a Wall Street Journal/NBC News poll, uniting more Republicans against his candidacy than any other potential candidate.

In 2000, Trump said he supported federal single-payer health care, a platform that is wildly unpopular among conservatives, and at one time supported a net worth tax of 14.25% on all Americans worth more than $10 million to repay the national debt.

Trump has a booked travel schedule in the next three months, Cohen said, and will be speaking often in the early primary states. He be in New Hampshire this Thursday to meet with local veterans and business owners.

Cohen said Trump has not yet renewed his show The Celebrity Apprentice.

“Nobody in the history of television has turned down a renewal,” a political advisor to Trump, Corey Lewandowski, told the New Hampshire Union Leader. “But Mr. Trump can do that.” 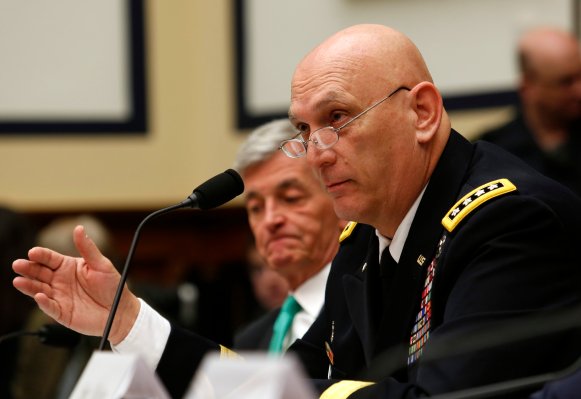 Pentagon and Its Allies Begin the Budget Death Watch
Next Up: Editor's Pick