Home Star Rihanna on Alien Life: 'Anything Is Possible'

Rihanna, Jim Parsons and Steve Martin make an unlikely trio as voice talents in their new animated movie, Home. But defying expectations, their chemistry—on- and offscreen—is hard to deny.

TIME sat down with the pop star, the Emmy-winning Big Bang Theory actor and the comedy legend, in New York as they promoted their film, out March 27. (Read the full interview in the new issue of TIME.) Home tells the story of Oh, a sensitive alien (played by Parsons) who inadvertently sabotages his race’s conquest of Earth; Martin is the captain who orders Oh’s arrest, while Rihanna gives voice to Tip Tucci, the refreshingly wry preteen human who goes on a globetrotting adventure with Oh to evade capture.

It’s a byzantine plot, to be sure (a cat named Pig and a car powered by convenience-store slushies are also implicated). But the core of Home lies in its depiction of how connections can make one feel less alone in the world. A cast of charismatic actors who balance one another’s energies gets that job done perfectly.

Watch the trio address President Barack Obama’s visit to the Home taping sessions, the possibility of life on other planets (Rihanna suggests keeping an open mind, while Martin prefers a closed one) and their favorite movies from childhood. In an offhanded reference to her dating history, the pop star in the room cited Beauty and the Beast: “I fell in love with the Beast. That’s pretty much my dating record so far.” You can put the girl in a children’s movie, but you can’t get her to forsake edginess entirely, not that her costars seem to mind. 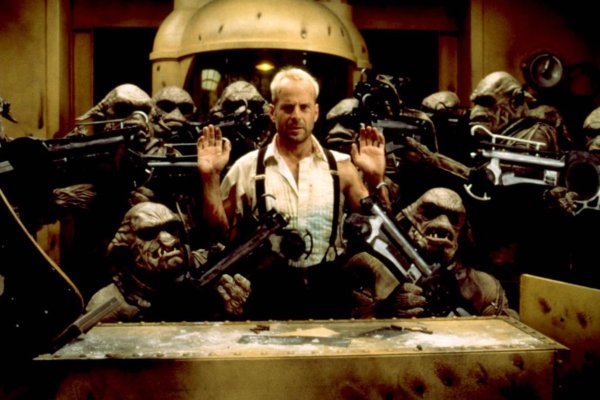 See Bruce Willis' Most Memorable Movies
Next Up: Editor's Pick