Meet the Historians Who Track Down War Criminals for the U.S. Government

Mark Shaffer’s title is “Special Agent.” He works as a unit chief of a department that tracks down criminals from around the globe, many of whom have evaded capture across the years and across borders. His department recently made the news because of their success in tracing suspected Bosnian war criminals who had escaped to the United States. But despite that action-movie-worthy background, he works with a group of people whose reputation is usually far less tough: historians.

“History’s always been a very big interest of mine,” Shaffer says. “[Working with historians] has been the most interesting work of my almost 20 years in law enforcement.”

After any conflict or crisis, some war criminals manage to escape to other countries and build new lives — often with fake identities. Too often they pose as refugees, fleeing the horrors of which they were guilty. They have lied on paperwork, and avoided admitting their past involvement in crimes overseas.

Committing that kind of fraud during immigration procedures would be grounds for deportation, but it’s not easy to uncover the truth in those situations. Many of the cases are to do with human-rights violations a long time ago, which is where historians come in. In the United States, the Immigration and Customs Enforcement department — where Shaffer heads the Human Rights Violators and War Crimes Unit — works with the FBI and the Department of Justice to build cases against these suspects, and prosecute them in immigration court. Just last week, the verdict was passed on one of their more high-profile targets: a panel declared that Carlos Eugenio Vides Casanova, who was a high-level official in El Salvador during a time of severe human-rights abuses in that country, could be deported.

Historians have the background in the culture, language and politics of particular regions of the world; they know where to look for the sources that might prove who was responsible for particular crimes. This kind of research relies on personal testimony, written records, photographs — and today, social media.

An important part of their work is creating the narrative, the story that the U.S. Attorney can present in court. This means putting together the threads that link pieces of evidence, building a full picture of a person’s role in human rights abuses. A particular challenge is state-sponsored abuses, where historians must contend with (in some cases) decades of cover-ups and silencing.

For perpetrators from some countries, the U.S. immigration trial will be the only trial they face. That decision, in a U.S. court, may be the only legal acknowledgment their victims ever receive. The ICE team knows this, and they want to make very case count. “Our historians are absolutely critical to getting these cases moving forward,” Shaffer told me.

Today there are three historians building these cases: one who focuses on Africa, one on the Balkans and one on Latin America.

At the Balkans desk is Michael MacQueen, who has made news over the last 25 years for his work pursuing war criminals: first Nazis, now those from more recent Balkans conflicts. He joined the Justice Department in 1988, when he left a PhD program at the University of Michigan in Eastern European studies. Fluent in German and Polish, his task was to trace former Nazis who had operated in Eastern Europe. Among his many coups, it was his research that led to concentration-camp guard John Demjanjuk (AKA Ivan the Terrible) being stripped of his U.S. citizenship and sent to Munich to face trial in 2009.

Today, younger historians are following in his footsteps. Latin America expert Ann Schneider is a prime example of how knowledge of history can help enforce global justice. When Schneider was a doctoral student at the University of Chicago, she wrote a dissertation about issues of reckoning with dictatorships, and legacies of state violence in Latin America. Five years ago, the opportunity came up to join ICE and pursue some of the criminals she had studied. “I can’t turn this down,” she recalls thinking, “to have my work really contribute to judicial processes.”

Schneider’s interest in human rights and accountability goes back to her childhood. In the fourth grade, she heard of four Catholic missionaries being murdered in El Salvador The nuns who ran her school held annual remembrances, and over the years the lack of justice for this brutal attack was part of what led Schneider to pursue a career examining how we deal with human rights abuses.

Two of the men in power when the death squads carried out this and other attacks were José Guillermo García (the minister of defense) and the aforementioned Vides Casanova (a national guard general, later also defense minister). Both had found their way into the United States in the late 1980s, having avoided prosecution.

Various groups campaigned against these men, but the challenges of proving their knowledge and culpability were compounded by the fact that these men had been part of a regime that previous U.S. administrations had supported. Finally in 2014, an immigration court in Miami found they were guilty of immigration fraud and human rights abuses, liable for “countless unnamed victims.” Vides Casanova’s appeal was denied on March 11, 2015. Garcia’s case is still pending, but the decision on Vides Casanova suggests his appeal will also be denied.

Vides Casanova and Garcia may never be tried in El Salvador. That country’s Amnesty Law prevents prosecution of crimes committed during their decades-long civil war.

Since its founding in 2003, ICE has deported more than 650 known or suspected human-rights violators from the United States. And while their mandate was originally to remove offenders, they are now working preemptively as well, helping NGOs to produce lists of suspects and put them in the lookout system to prevent them gaining access to the USA.

They continue to gather information from refugee groups in the USA too. A major concern for victims who have fled to safety elsewhere in the world is that they might encounter their attackers in the very same refugee communities in which they live.

The unit is working today to prevent this happening. Over the last four years, ICE’s Human Rights Violators and War Crime Center has issued more than 67,000 lookouts for people from more than 111 countries and stopped 140 human rights violators or war-crime suspects from entering the United States.

Their work sends a message to victims: you will be heard. And to perpetrators: you cannot simply walk away. It’s a lesson that, appropriately, fits neatly with the historians’ perspective. Just because something is past doesn’t mean it’s over. 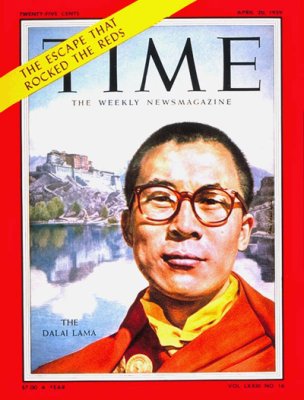 How and Why the Dalai Lama Left Tibet
Next Up: Editor's Pick