Why We Should Reconsider the War on Crime

Police advance through a cloud of tear gas on Aug. 17, 2014 in Ferguson, Mo.
Scott Olson—Getty Images
By Elizabeth Hinton

Fifty years ago this month, President Lyndon B. Johnson called for a “War on Crime,” a declaration that ushered in a new era of American law enforcement. Johnson’s turn toward crime control as a federal priority remains his most enduring legacy—even more than the Great Society programs that scholars often herald as his greatest achievement—and continues to shape what is arguably the most important social crisis the United States now faces.

Until recently, the devastating outcomes of the War on Crime that Johnson began had gone relatively unnoticed. Then, last August, during the series of demonstrations in Ferguson, Mo., images of law-enforcement authorities drawing M-4 carbine rifles and dropping tear gas bombs on protestors and civilians alike shocked much of the American public. Ferguson looked like a war zone. Many commentators attributed this sight to the ongoing technology transfers from the defense sector to local law-enforcement authorities, which began during the War on Drugs and escalated in the climate of the War on Terror.

But the source of those armored cars is much older than that. It was the Law Enforcement Assistance Act that Johnson presented to Congress on March 8, 1965, that first established a direct role for the federal government in local police operations, court systems, and state prisons. Even though the Voting Rights Act is considered the major policy victory of that year, Johnson himself hoped that 1965 would be remembered not as the apex of American liberal reform, but rather as “the year when this country began a thorough, intelligent, and effective war against crime.”

President Johnson saw the urban policeman as the “frontline soldier” of this mission, and, as a result, the administration focused on building the weapons arsenal of local law enforcement. The 1965 legislation created a grant-making agency within the Department of Justice, which—with $30 million at its disposal, or $223 million in today’s dollars—purchased bulletproof vests, helicopters, tanks, rifles, gas masks and other military-grade hardware for police departments. Like the Mine-Resistant Ambush Protected vehicles driven first in Iraq and then in Ferguson, much of this equipment had been used by the military in Vietnam and Latin America.

Those programs culminated in the Omnibus Crime Control and Safe Streets Act of 1968, the last major piece of domestic legislation Johnson passed, which gave the Department of Justice a new degree of influence over social policy by enlarging the grant-making agency into the Law Enforcement Assistance Administration. In contrast, the Office of Economic Opportunity at the Center of the War on Poverty never grew into a more permanent agency. Over time, national policymakers retreated from and eventually dismantled many of the social welfare programs of the Great Society; the War on Crime, on the other hand, became the foremost policy approach to the social and demographic challenges of the late twentieth century.

Indeed, federal law-enforcement programs have expanded rapidly over the past five decades. Despite the misconception that the Reagan administration spearheaded the rise of urban surveillance and mass incarceration, federal policymakers had already dedicated a total of $7 billion in taxpayer dollars (roughly $20 billion today) to crime-control programs before Reagan took office in 1981. The most recent available figures from the Bureau of Justice Assistance indicate that federal officials have sustained these funding commitments, appropriating well over $1 billion annually to law enforcement programs at the state and local level.

Law enforcement and criminal justice remain at the heart of the nation’s economic and social programs. That fact began to change life for many Americans well before the attention it got in the last year. For example, in Detroit in the early 1970s, officers of a decoy squad known as STRESS (an acronym for “Stop the Robberies, Enjoy Safe Streets”) killed 17 African American civilians—the vast majority unarmed—during its two years of operation. If the “War on Crime” was meant to be a useful metaphor that would spur policymakers into action, it quickly evolved into what resembled an actual war.

And it’s never been a matter of policing alone. Proximity to the expanding punitive arm of the federal government puts citizens, often low-income urban Americans, in close contact with the criminal justice system. Federal grants were tied to arrest rates, encouraging more apprehensions in those neighborhoods that had been explicitly targeted for special law-enforcement programs. New sentencing guidelines and criminal categories emerged that increased the chance that men and women from these same communities would serve long sentences in prison. In turn, the penal confinement of disproportionate numbers of young African American men during the 1970s often transformed first-time offenders and drug addicts into hardened criminals. Even Richard Nixon referred to prisons as “colleges of crime.”

Although the Johnson administration had created a blueprint for a national crime-control program to improve American society, the long-term impact of the shift toward surveillance and confinement has brought our nation to a fiscal and moral crossroads.

Last year marked the 50th anniversary of Johnson’s call for a “War on Poverty” in his first State of the Union address. Yet, according to Census Bureau estimates, the poverty rate today is equivalent to its rate in the mid-1960s. This year, with the 50th anniversary of the War on Crime upon us, and with #BlackLivesMatter and other movements against justice disparities gaining momentum, we should include the implications of this less understood dimension of the Great Society in our reconsiderations of the past.

In order to move forward as a nation we must come to terms with the reality that the programs unleashed by the War on Crime a half-century ago have overshadowed much of the War on Poverty’s social promise. President Johnson could not have foreseen the unintended consequences of the path he set in motion. But what is perhaps the central irony of the late 20th century is that one of the most idealistic enterprises in the history of the United States has left a legacy of crime, incarceration and inequality.

Elizabeth Hinton is an Assistant Professor of History and African and African American Studies at Harvard University. She is the author of a forthcoming history of the War on Crime and its long-term impact on domestic policy. 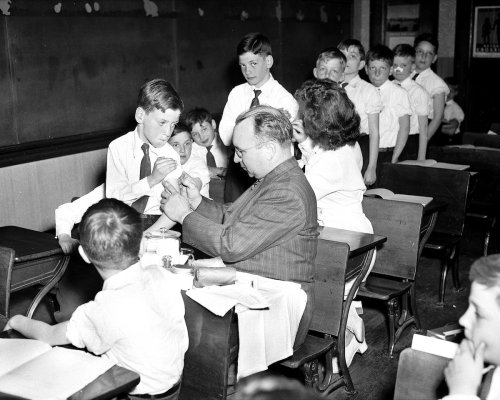 When Did Mandatory Vaccinations Become Common?
Next Up: Editor's Pick