How St. Patrick's Day Became the Most Global National Holiday

Even though St. Patrick is the patron saint of Ireland, parades and revelry in his name will ensue worldwide on Tuesday. The holiday’s popularity is global, spreading far past the Emerald Isle to cities with very few ethnic Irish people. There’s no obvious explanation for why Ireland’s national day is celebrated so broadly instead of, say, Bastille Day, the Fourth of July or Cinco de Mayo.

As historian and Dublin-based Boston College professor Michael Cronin explains, the modern version of the holiday is largely an American export, celebrations gaining popularity as Irish immigrants asserted their cultural and political presence in American society. Parades in the U.S. started cropping up in the 1800s, but in Dublin, Cronin says, you wouldn’t have seen that kind of celebration until around the 1990s.

Now, decades later, the wearing of the green is an international tradition — but each location’s history uniquely informs the rest of the celebration.

“St. Patrick’s Day as we know it is a new world phenomenon,” Patrick Griffin, a history professor at Notre Dame, says. “There’s nothing really Irish about it now; it’s nostalgic and schmaltzy.”

But beneath all the paper shamrocks and Guinness merchandise, every city still has its own history and its own holiday flair, sometimes involving Irish immigrants, and funnily enough, sometimes not. Here’s a look at how St. Patrick’s Day is celebrated around the world:

The Louisiana port city loves a good party, and since New Orleans was also a major hub for Irish immigration to the U.S., it’s no surprise they’ve been hosting festivities since 1809. What is a bit bizarre, however, is one of the day’s most cherished traditions: a vegetable food fight. According to Cronin, the practice has a benign origin.

“For the feast of St. Patrick, which is of course a Catholic holiday, it was common for the rich people up on floats in the parade to throw food down for the poor,” he says.

Eventually, the noble intentions deteriorated into a free-for-all of cabbage, carrots, potatoes and onions, which parade floats still stock in ample supply. Revelers will toss them into the crowd along with another New Orleans St. Patrick’s Day mainstay, the Moonpie.

For most countries, even the U.S., St. Patrick’s Day is an unofficial holiday. It is only officially recognized in Ireland and Northern Ireland, Newfoundland, and a small Caribbean island called Montserrat. Also known as the Emerald Isle of the Caribbean, the island, still a British territory, was a refuge for persecuted Irish Catholics as far back as the 17th century. Most of Montserrat’s 5,000 residents claim some Irish heritage or affiliation.

The celebration, a unique fusion of Irish, African and Caribbean tradition, also commemorates a failed slave revolt on St. Patrick’s Day 1768. The island hosts a “freedom run” to mark the anniversary, while also taking part in some more familiar practices, like serving green beer.

Japan’s capital city has hosted St. Patrick’s festivities since 1992. In the years following, celebrations have spread all over the nation. Tokyo’s parade is unique because it was primarily organized by people who aren’t Irish. Some Japanese people, Cronin says, were so enamored with the holiday and with Irish customs that they adopted the holiday.

The annual festivities are now organized by a non-profit called Irish Network Japan, a group comprised of both Irish and non-Irish Japanese people that seeks to foster cultural exchange and unity.

One of the longest-running parades on the North American continent is hosted in Montreal, where the Quebecois have staged an annual parade since 1824. And they have been celebrating in some fashion since the mid-1700s, when Irish soldiers in the British army observed St. Patrick’s Day there during the conquest.

Cronin says that in this case, the enthusiasm is less about Irish identity and more about a shared Roman Catholic faith. Montreal was originally colonized by Catholic missionaries and maintains a strong Catholic identity today.

A village in southern Ireland holds the Guinness World Record for shortest St. Patrick’s Day parade. Beginning in 1997, residents would march for only 77 ft.—the distance between the village’s two pubs. Unfortunately, the parade has been defunct since 2007, after the closure of one of the pubs, the Lee Valley Inn.

“For people in Ireland it’s different than America,” Griffin tells TIME. “They’re poking a little fun at themselves.”

Every year, the White House hosts the Irish Prime Minister for a “Shamrock Ceremony,” where the visitors present the president with a crystal bowl full of shamrocks. This year, president Barack Obama will meet with Irish prime minister Enda Kenny. The ceremony is followed by dinner, where the Irish politicians are treated to a “traditional” Irish meal of corned beef and cabbage.

But most Irish people, Cornin says, aren’t really familiar with the pink, salty dish. It likely developed in Irish American communities because corned beef is a cheap cut of meat. In Ireland, he says, a more typical St. Patrick’s Day feast might feature a spring lamb.

Love for the holiday is so widespread it even extends outside the atmosphere onto the International Space Station. In 2013, Canadian astronaut Chris Hadfield wore a green sweater and bow tie aboard ISS, took a photo of Ireland from orbit and even posted a recording of himself singing “Danny Boy.” Two years earlier, American astronaut and flautist Catherine Coleman performed an Irish flute song in space for the holiday.

“It’s amazing to me,” says Cronin. “There’s no other nation in the world that can convince all the other countries to celebrate their national day. Why is an American kid worried about the patron saint of Ireland?”

Whatever the reason, on Tuesday when you dig for that shamrock tie you only wear once a year, know that you are most definitely not alone. 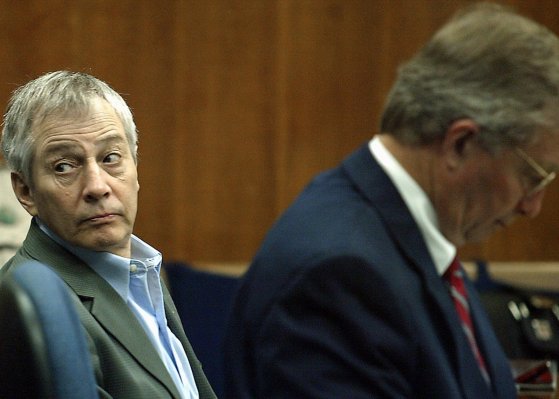 How Robert Durst Was Acquitted of Murder Years Before The Jinx
Next Up: Editor's Pick