The Other Giant Leap: What Happened to the First Man to Walk in Space

The spacesuit worn by Alexei Leonov on the first-ever spacewalk on March 18, 1965. The suit was photographed at the Memorial Museum of Cosmonautics in Moscow on March 16, 2015.
Marco Grob for TIME
By Jeffrey Kluger

One day, perhaps, there will be an astronaut Mount Rushmore. There’s little doubt about some of the names that will be included: Armstrong, Glenn, Lovell, Gagarin. And then, of course, there must be Leonov—that is, Alexei Leonov, the first human being to walk in space, the commander of the Russian portion of the joint Apollo-Soyuz mission in 1975, and the man who likely would have been first on the moon had the Soviets beaten the Americans—who died today, October 11, at age 85, after a long illness. Leonov’s face—kind, inviting, nearly cherubic—was almost too soft to be immortalized in stone. But his achievements, his courage, his place in history, are very much the stuff of mountains. Below is a tribute TIME first published in 2015, following a photo-shoot and interview conducted in Russia.

No one knows what the first words of the almost-first man on the moon would have been. They surely would have been contemplated well in advance. No such landmark moment was left to chance back in the days of the great lunar steeplechase. And they would surely have been in Russian.

Half a century ago, when the space race was raging, no truly objective, truly honest observer gave the Americans much of a shot. The Soviet Union simply had too big a lead, having launched the first satellite (Sputnik), the first space dog (Laika), the first human being (Yuri Gagarin), the first woman (Valentina Tereshkova) and the first two- and three-person spacecraft. And 50 years ago this week, on March 18, 1965, they seemed to have sealed the deal, when Alexei Leonov, then just 30 years old, became the first human being to walk in space. Had things gone as planned, he would have been first on the moon too.

For your security, we've sent a confirmation email to the address you entered. Click the link to confirm your subscription and begin receiving our newsletters. If you don't get the confirmation within 10 minutes, please check your spam folder.
Alexei Leonov, the first man to walk in space, photographed at the age of 80 in his office in Moscow on March 12, 2015.
Marco Grob for TIME

Leonov, whom TIME photographer Marco Grob visited for a portrait session earlier this month, was the stuff of Soviet legend from the very beginning. Born in a coal-mining region in Siberia, he was the son of a woman who earned the country’s coveted Order of Maternal Glory, in recognition of what was seen as the greatest service a Soviet woman could perform for the Soviet state: having a great many babies—in her case nine. Leonov joined the Young Communist League, went on to flying school—where he made 115 parachute jumps—and was selected in the very first astronaut class.

There was little way to overstate the risks Leonov faced on his first mission, when he ventured outside his Voskhod spacecraft—a sturdy, tank-like vehicle that was the Soviet designers’ specialty—and drifted into space protected only by what amounted to a far-frailer fabric and rubber spacecraft. But TIME, in its March 26, 1965 cover story about the mission, tried. “As air escaped from the [spacecraft’s air lock], the vacuum of space reached into it like a monster’s claw,” TIME wrote. “Though it must have been rehearsed on earth over and over again, this was surely a moment of hideous crisis.”

The astonaut Alexei Leonov floating in space during his first spacewalk on March 18, 1965.
Keystone-France/Gamma-Keystone/Getty Images

Leonov, however, felt no such apprehension. Like so many astronauts and cosmonauts, he describes the spacewalk experience as one of great peace. “I don’t remember anything as well as I remember the sound—this remarkable silence,” he told Grob. “You can hear your heart beat and you can hear yourself breathe. Nothing else can accurately represent what it sounds like when a human being is in the middle of this abyss.”

Like other spacewalkers too, he powerfully recalls the view. “I close my eyes and I see the entire Black Sea, the Crimean Peninsula. This is not a map, it’s what I saw. I can take a pencil now and draw it, because I remembered it for the rest of my life. I looked up and there was the Baltic Sea, Gulf of Kaliningrad. I spent my adolescence at the Gulf of Kaliningrad. It was so unusual.”

TIME’s coverage of the mission gave Leonov and the Soviets their deserved applause—acknowledging the triumph of the spacewalk, as well their program’s commanding advantage in booster power and technology, especially compared to NASA’s puny, two-man Gemini ship, which was set for its first launch just a few days after Leonov’s flight. The historic spacewalk and the bruising Voskhod, TIME conceded, hung over the Gemini hoopla like an “embarrassing shadow.”

But TIME’s story was grudging too—sniffing at the images the Soviets released of Leonov’s walk as “dim and probably purposely fuzzy,” while selecting perhaps the dimmest and fuzziest of all for the cover and passing over the far crisper ones. Soviet party chief Leonid Brezhnev “did his leaden best” in congratulating the crew, TIME wrote, and the country’s official announcement of the spacewalk was “as formal as if carved in stone.”

But never mind. There was no denying the huge step that a human being—even if it wasn’t an American human being—had just taken in space, and its impact has endured. “Now all astronauts who are preparing for [a mission] undergo full training in order to be able to work in open space,” says Leonov. “This isn’t even up for debate. If you can’t work, you don’t belong in the program.”

Leonov himself would get only one more flight. He was tapped by the Soviets to command the first circumlunar mission in 1969 and all but certainly would have been chosen for the first moon-landing mission that would follow. History notes that those flights never happened, that the U.S. overcame the huge Soviet lead and eventually won the race to the moon. Leonov did not take to space again until 1975, when he commanded the Soviet half of the joint Apollo-Soyuz mission, a flight that marked the formal end of the space race, celebrated the age of détente and led, decades later, to the multinational cooperation of the International Space Station.

People celebrating the success of the mission Voskhod II in Moscow in 1965.
Keystone-France/Getty Images

As Grob’s elegant photos show, Leonov still wears his medals and his dignity well. He has outlived legends—Ed White, who became America’s first spacewalker, in June of 1965; Neil Armstrong, who kicked up the lunar dust Leonov was supposed to be first to stir; Gagarin, who was considered too great a national prize ever to endanger by sending to space again and who died instead in a routine training run of a MiG-15 jet in 1968. It was Leonov who identified his friend’s remains by a birthmark on his neck.

The half a century since Leonov’s walk is a lot of time in human history, nothing at all in cosmic history. That dual kind of timekeeping is something the species only truly began practicing after men like Leonov went aloft—changing our terrestrial perspective forever.

Read next: Mars Probably Had More Water Than the Arctic Ocean, Study Says 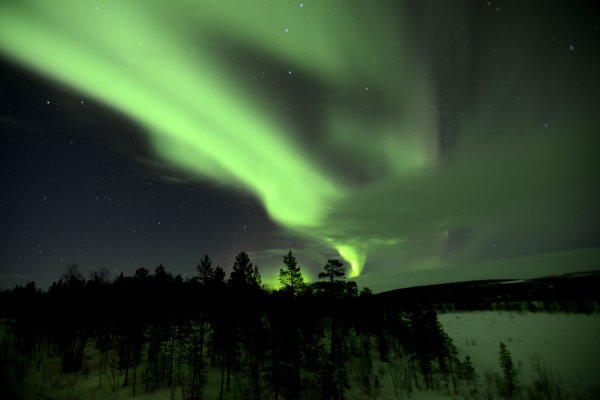 Watch the Northern Lights Turn a Spectacular Green for St. Paddy's Day
Next Up: Editor's Pick