The White Collar star and 30 Rock alum surprised AHS fans by taking the stage during Sunday’s closing night of PaleyFest—moderated by EW’s own Tim Stack—to announce that they will star in the series’ upcoming installment alongside the previously announced Lady Gaga.

This won’t be Bomer’s first trip to Horror Story. TheMagic Mike star—who previously worked with AHS creator Ryan Murphy on Fox’s Glee and HBO’s The Normal Heart—briefly appeared on Freak Show as a prostitute who was murdered by Dandy (Finn Wittrock). “I love collaborating with Ryan Murphy,” he said, playing coy on exactly what his role will be, though he is billed as the lead alongside Lady Gaga. “I can’t confirm nor deny that there will be a romantic relationship with her.”

Jackson, meanwhile, had a short arc on Glee as Dustin Goolsby, the coach of rival glee club Vocal Adrenaline. His other TV credits include Curb Your Enthusiasm and Ugly Betty. “I did Glee in Season 2, so I knew Ryan a bit,” Cheyenne said, noting he knows nothing about his role. “About 6 months ago, [Ryan] talked to me and I said it’s my absolute favorite show on television. I’m really, really excited… I’m absolutely nervous, but I’m really excited.”

As for original cast member Jessica Lange, the actress definitively confirmed that she will not return to American Horror Story, as she previously told EW. “Yes, I’m done,” she said. “We’ve had a great run here. I have absolutely loved doing these four characters that I’ve had the opportunity to play. In all the madness, I’ve loved the writers, my actors, Ryan and the whole, I mean, insanity of it, shooting here, shooting in New Orleans, the stories, everything.”

The 13-episode fifth season of American Horror Story, which moves its production back to Los Angeles, is expected to debut in October. 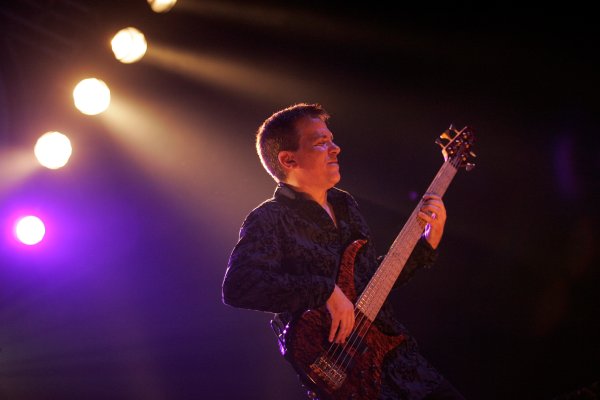 Toto Bassist Mike Porcaro Dead at 59
Next Up: Editor's Pick