Police Announce Arrest in Shooting of Officers in Ferguson

Authorities in St. Louis announced Sunday afternoon that an arrest had been made in connection with last week’s shooting of two police officers outside the Ferguson police department.

St. Louis County Prosecuting Attorney Robert McCulloch said in a news conference that charges were filed against a 20-year-old man, Jeffrey Williams. McCulloch added that Williams admitted to firing the shots but claimed to have been firing at others, not the officers.

Among the charges are two counts of first-degree assault, one count of firing a weapon from a vehicle and three counts of armed criminal action, McCulloch said. Williams is being held on $300,000 bond.

Two officers were wounded shortly after midnight Thursday morning near the end of a protest that followed the resignation of police chief Thomas Jackson, which came in the wake of a scathing Justice Department report that found rampant racial bias in the Ferguson police department.

An officer from Webster Groves, 32, was struck in the cheek while working a security line outside the department while another officer from St. Louis County, 41, was hit in the shoulder, according to the St. Louis Post-Dispatch. Both were released from a hospital later that morning.

The attack had been described as an “ambush” by St. Louis County police chief Jon Belmar, and Attorney General Eric Holder later called the gunman a “damn punk.”

The St. Louis suburb has been a national focus since Aug. 9, when unarmed black teenager Michael Brown was shot and killed by white police officer Darren Wilson.

Read next: The Road from Selma to Ferguson 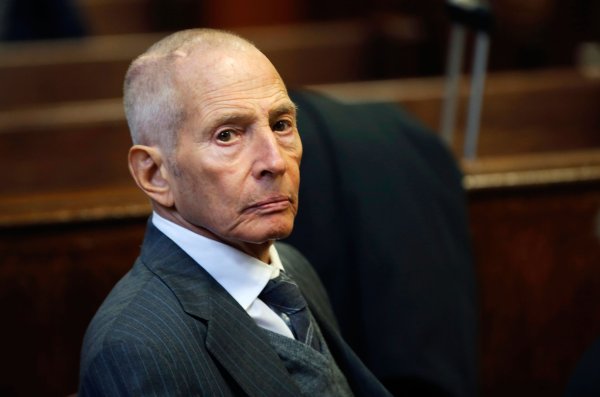 The Jinx Subject Is Arrested
Next Up: Editor's Pick