How Your USB Cables Are About to Change Forever

Announced earlier this week, Apple’s amazingly thin, new Macbook has made a lot of noise. And perhaps the loudest sounds were the groans over the two-pound notebook’s singular port, which supplies all the power and peripheral connectivity that the 12-inch laptop requires. But looking beyond the lack of outlets, the new USB-C port itself reveals a major revolution in the future of computing and power.

“USB technology has really evolved into a single source that can deliver audio and video as well as data and power, all simultaneously, over a single cable and connector,” says Jeff Ravencraft, president of the USB Implementer’s Forum, a non-profit group of more than 700 member companies that are responsible for the advancing USB technology.

When the new USB-C port was being dreamt up, engineers focused on three fundamental features: performance, power, and convenience. From a data performance perspective, USB-C has the potential to one day deliver up to 20 gigabits per second — but for now, it’s just 10 gigabits per second. (USB 3.1, USB-C’s predecessor, can also push through 10 gigabits per second, but the smaller Micro-B connector found on many smartphones can only handle half as much.) As for power, the new, smaller connector can pack up to 100 watts. In comparison, Apple’s Lightning cable currently charges iPads and iPhones with a 12 watt charger, and the Macbook Pro MagSafe power adapter pulls 85 watts from wall outlets. The convenience aspect of USB-C is that it’s the first truly reversible USB cable, which means, similar to Apple’s Lightning cable, either side can face up.

Since the original release of USB, people have complained about its one-side-up nature, a confounding characteristic that defied the law of averages. While in theory, 50% of the time you should be inserting a USB cable into a port correctly, it seems like 100% of the time you had the damned thing upside down. So, figured computer makers, the best way to fix this problem was to finally make a “universal” USB cable. (Note: USB has always stood for “universal serial bus.”)

Unfortunately, USB-C will take that hoard of USB cables you’ve painstakingly collected throughout the years and render them obsolete. On the one hand, once your gadgets all roll over — every keyboard, USB-charging Bluetooth speaker, fitness band, and USB-to-AC power plug — you’ll never have to hunt for a mini-USB cable (or was it micro-USB?) again. Instead, there will only be one cord to rule them all. (But never mind the billions of existing USB devices already out in the wild which, until they go away, will command a vast legion of adapters.)

The Macbook’s early adoption of USB-C may seem like the typical Apple bleeding edge move, but it’s actually a refreshing show of support for an open standard the likes of which the company doesn’t typically undertake. While it was the first computer company to put Wi-Fi into its computers, Apple also developed its own proprietary 30-pin Dock connector, Thunderbolt, and Lightning cables, which have largely appeared exclusively on Apple devices. Due in part to the environmental wastefulness of these many different cables, proprietary connectors were outlawed by the European Union, which has mandated that cellphone manufacturers adopt the MicroUSB plug.

But USB-C is designed to replace that cord, too. And it’s important to have the support of Apple, because the bi-directional cable will eventually replace pretty much every cord ever. That’s because USB-C isn’t just a data or power cable — it has the ability to work in “alternate modes,” too. For example, there are already efforts afoot to make the new cord work like a DisplayPort or MHL cable, carrying video signals from a computer to a display. In order for one of the new MacBooks to do that today, it would need a cable with USB-C on one end and one of those other plugs on the other. But eventually, in the not-too-distant future, monitors, hard drives, mice, keyboards — basically any computer-related product with a plug — will have a USB-C port instead of an HDMI, MiniDisplay, Firewire or any other kind of outlet.

“This is the fastest transition that we’ve ever experienced with USB, and I’ve been working on USB for 15 years,” says Ravencraft. After Apple’s announcement early last week, Google also announced support for USB-C, with its new Chromebook Pixel sporting the port, and upcoming Android phones are likely to have it too. The goal is to bring a single cable to the masses that’s small enough, physically robust enough, and powerful enough to be the standard for the next 20 years—so we won’t have to do this again for a long time. It will be the only cable we need — except, of course, for Lightning cables, because you know Apple’s not giving up on those things any time soon.

Read next: The New MacBook Is Perfect for the iPad Generation 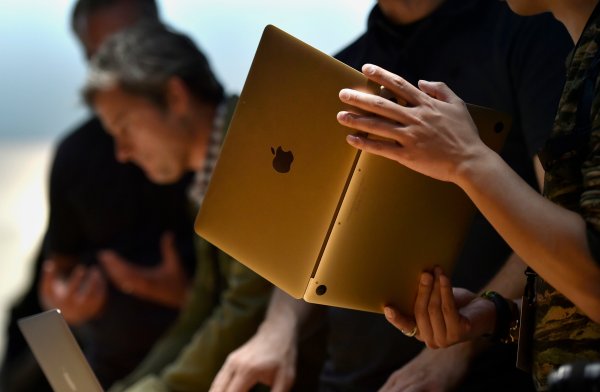 This Is the Biggest Problem With the New MacBook
Next Up: Editor's Pick