Scott Walker in New Hampshire: I Am Not a Flip-Flopper

Addressing reporters following a well-received speech to GOP activists at a gathering organized by the State Republican Party, Walker, who is all-but-certain to declare a presidential bid in the coming months, said those trying to brand him with the label work for opposing campaigns. “Just a narrative from the other campaigns that are frustrated with the fact that we’ve got a strong reputation of keeping our word,” Walker said in a response to a question from a reporter.

Walker conceded that he switched his position on immigration reform, after saying earlier this month that he no longer backs proposals that would allow those who live in the U.S. illegally a path to citizenship, after supporting those plans in 2013. “This is one where we listened to people all across the country, particularly border governors,” Walker said. “We saw how the President messed that up, and that’s an issue where I think people want leaders who are willing to listen to people.”

The “flip-flopper” moniker is a particularly fraught one for presidential hopefuls. Mitt Romney’s well-documented record of changing position on policy was a thorn in his side in both of his White House bids. On Friday, former Florida Gov. Jeb Bush, an avowed supporter of immigration reform, pointed out Walker’s changing views in a conversation with reporters. “He’s changed his views on immigration, yes,” Bush said.

Walker said claims that he had changed positions in other areas “ridiculous.”

“I’ve always been a supporter of Right to Work, I was a sponsor of it,” Walker said. “I gave 300,000 union workers in my state the right to work four years ago, and I just signed it into law.” But for years, Walker had indicated he had no interest in pushing legislation that would prohibit agreements between businesses and unions that require employees to pay union dues. “My point is I’m not pushing for it,” Walker said during his re-election campaign last year. “I’m not supporting it in this session.”

Walker has also come under scrutiny on his commitment to opposing abortion. Some social conservatives has highlighted his 2014 campaign ad which said he supports “legislation to increase safety and provide more information for a woman considering her options. The bill leaves the final decision to a woman and her doctor.”

“I’m pro-life,” Walker told reporters on Saturday. “My position’s consistent on that. They’re taking an ad out there that talked about what the law did in the state which was endorsed by Wisconsin right to life.”

On education, Walker’s first budget funded the implementation of the Common Core standards, now anathema to the GOP base. Walker has since backed away from supporting the standards, calling for a commission to review it in his state.

Asked what the difference is between changing his mind and flip-flopping, Walker said the politically damaging charge shouldn’t apply when politicians are responding to voters.

“I think the key is if you’ve listened to people and you have a valid argument for why you’ve done it—we’ve laid out exactly what we’ve done—but I think people want strong leaders and they want leaders who’ll listen to the people,” he said.

Walker, who is on record opposing Ethanol mandates in Wisconsin, said last week in Iowa that he supports maintaining the Renewable Fuels Standard, before gradually phasing it out. Asked about the discrepancy, Walker said, “I didn’t enact it in Wisconsin.”

“My position was about Wisconsin and my position was clear,” he continued. “What we’ve done in terms of what we said in Iowa was pretty clear as for going forward. Eventually we want the standard phased out, but right now it needs to be in place for Iowa.” 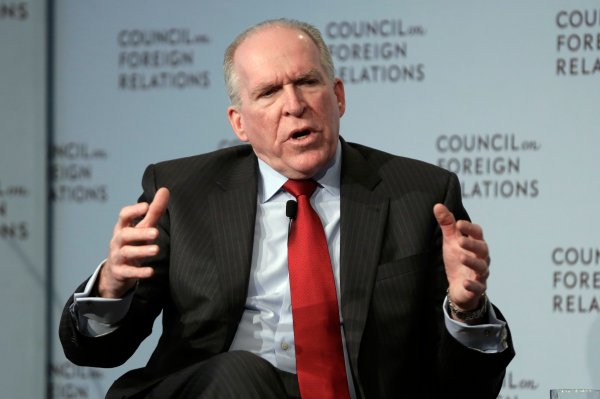 CIA Chief Says ISIS Not Islamic But 'Psychopathic'
Next Up: Editor's Pick