At a question and answer session at the Center for Foreign Relations in New York City on Friday, Brennan said using “Islamic” or “Muslim” to describe ISIS militants gives them “the type of Islamic legitimacy that they are so desperately seeking, but which they don’t deserve at all.”

“I do think it does injustice to the tenets of religion when we attach a religious moniker to them,” Brennan said.

President Barack Obama has come under fire from some conservative commentators and politicians for not identifying the extremists with the religion they claim to represent. Addressing the criticism head on at the White House Summit on Countering Violent Extremism last month, Obama said that those who use the religious descriptors are peddling a “lie” that helps ISIS recruit Muslims to its cause.

An estimated 20,000 foreign fighters, including several thousand from Western countries, have traveled to the region to join ISIS, which has proven adept at using social media to reach a global audience. Brennan announced last week a sweeping reorganization of the CIA that included the creation of a new “Directorate of Digital Innovation” devoted to cyber operations.

At the talk on Friday, which was hosted by CBS News’ Charlie Rose, Brennan warned that defeating ISIS’s capabilities and appeal will “take years.”

“We need to expose just how murderous and psychopathic these individuals are,” he said. 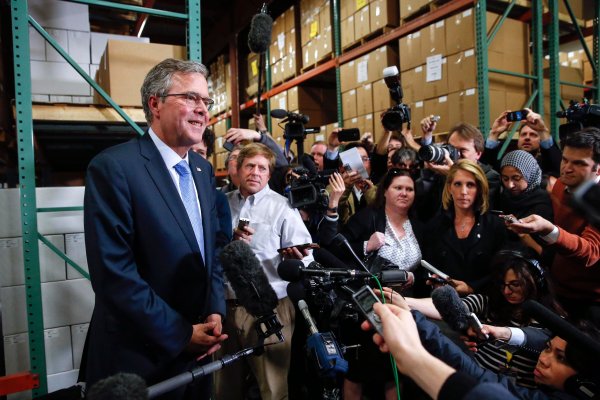 Jeb Bush Declines to Endorse GOP Letter to Iran
Next Up: Editor's Pick