Key details in a Wikipedia article about the police killing of Eric Garner last August, including the use of the word “chokehold,” were changed on computers inside the New York Police Department headquarters in Manhattan.

The Wikipedia account of the confrontation between police officers and Garner, an unarmed black man who was suspected of selling loose cigarettes, was changed in several instances, including two cases in which “chokehold” was replaced once with “chokehold or headlock,” and once with “respiratory distress,” Capital New York reports.

The changes were made from IP addresses that were registered to the NYPD headquarters’ network.

“The matter is under internal review,” an NYPD spokeswoman, Det. Cheryl Crispin, wrote in an email to Capital.

Eric Garner’s Wikipedia page also contained a line that was changed from “Garner raised both his arms in the air” to “Garner flailed his arms about as he spoke.”

Other Wikipedia pages that detail instances of alleged police brutality were also changed from the same IP addresses. A user on 1 Police Plaza’s network tried in 2007 to delete the entry about Sean Bell, an unarmed black man who was killed by undercover NYPD officers in November 2006.

Changes were also made to the page about Amadou Diallo, who was killed when police mistook his wallet for a gun in 1999. And articles about stop-and-frisk, the age of consent in Europe and even the British Band Chumbawamba were also edited. 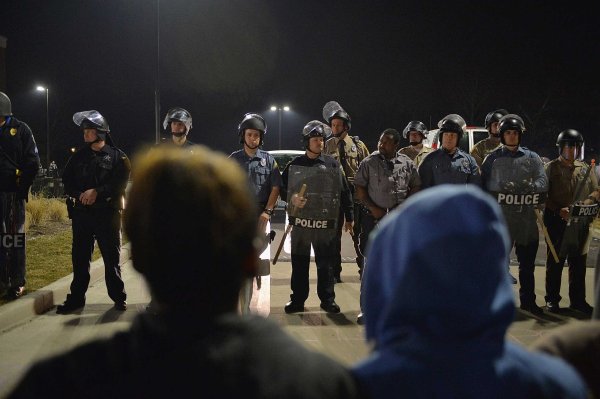 Ferguson Activists Worry About Aftermath of Police Shooting
Next Up: Editor's Pick