The Japanese government is so worried about the country’s low birth rate that it’s thinking about getting into the matchmaking game.

A new draft policy to increase Japan’s flagging birth rate includes support for matchmaking, leave policies, and fertility centers in order to jump-start baby-making and address the country’s aging population. While the national government may not be sponsoring its own matchmaking efforts, it will be support local governments sponsoring speed-dating events, the Japan Times reports.

The number of births in Japan fell to a record low for the fourth year in a row, with just over one million newborns in 2014 compared to 1.269 million registered deaths. By 2060, nearly 40% of Japan’s population will be over 65, and elderly citizens already make up a quarter of the population. The birthrate has fallen from 4.54 children per mother in 1947 to 1.43 in 2013.

Matchmaking is one of several measures proposed by the government to fight the inevitable population dwindle if Japan doesn’t get its birth rate up. Other measures include expanding the scope of free nursing care, building more fertility centers, and increasing paternity leave. The government says it hopes that by 2020, 80% of men will take paternity leave immediately after the birth of their child, and 13% will take paternity leave to help care for children at some point in their careers. (Currently only 2% of men take time off for childrearing.) 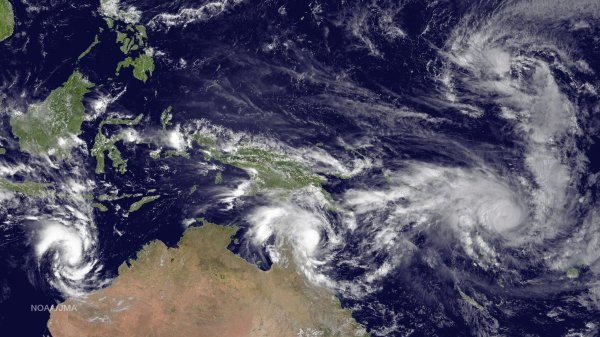 Cyclone Pam Bears Down on South Pacific
Next Up: Editor's Pick