Pope Francis Says His Tenure May Last Less Than 5 Years

Pope Francis arrives to lead a mass during his pastoral visit to the parish of Santa Maria Madre del Redentore in Rome on March 8, 2015.
Alessandro Bianchi—Reuters
By Noah Rayman

Pope Francis, who was named pontiff two years ago on Friday, said he doesn’t expect to be Pope much longer.

In an interview with the Mexican broadcaster Televisa published Friday, the Argentine Pope predicted a “brief” tenure for himself. “I have the feeling that my pontificate will be brief: four or five years; I do not know, even two or three,” Pope Francis, 78, said. “Two have already passed. It is a somewhat vague sensation.”

“Maybe it’s like the psychology of the gambler who convinces himself he will lose so he won’t be disappointed and if he wins, is happy. I do not know. But I feel that the Lord has placed me here for a short time, and nothing more … But it is a feeling. I always leave the possibility open,” he said.

The papal post is traditionally held until death, though Francis’s predecessor Pope Benedict XVI resigned in 2013 after roughly seven years in office, becoming the first pope to step down in nearly 600 years. The current Pope has suggested in the past that he would lead a short papacy and he has not ruled out retiring.

In the interview released Friday, Francis said he does not dislike being Pope, but said one thing in particular does bug him. “The one thing that I would like is to go out, without anyone recognizing me, and go to a pizzeria to eat pizza,” Francis said.

Read an English translation of the interview here. 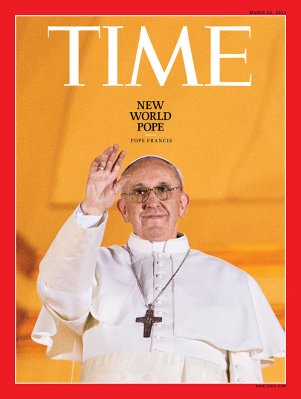 How the World Knew What to Expect From Pope Francis
Next Up: Editor's Pick