President Obama had harsh words for whoever is responsible for the shooting incident in Ferguson, Mo., that left two police officers wounded.

“There’s no excuse for criminal acts,” he said in an appearance on Jimmy Kimmel Live, marking his first public statements on the incident. “They’re criminals. They need to be arrested.”

Obama offered prayers to the families of those who were wounded, but noted that the shooting shouldn’t detract from the issues in the community the federal government has been helping to address.

He also didn’t mince words about a recent Department of Justice report that showed patterns of racism within the Ferguson police department. “What happened in Ferguson was oppressive and objectionable,” Obama told the late-night talk-show host.

“There was a whole structure there that indicated both racism and just a disregard for what law enforcement was supposed to do,” he added.

Thursday’s appearance was the President’s first on Jimmy Kimmel, though Obama is no stranger to late night. In true Kimmel fashion, the President was asked to read mean tweets about himself before sitting down for an interview. Though he noted that Washington could be much harsher.

“Those weren’t that mean,” Obama said. “You should see what they say in the Senate.” 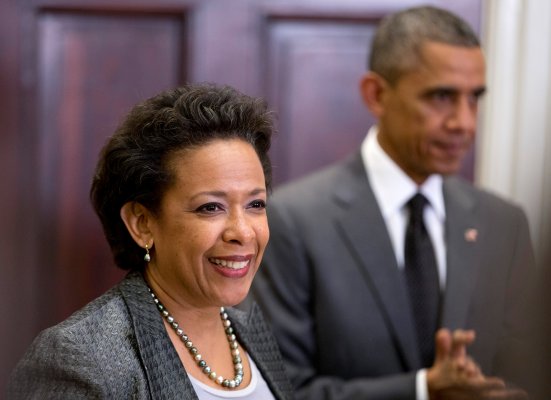 Loretta Lynch's Long Wait May Soon Be Over
Next Up: Editor's Pick